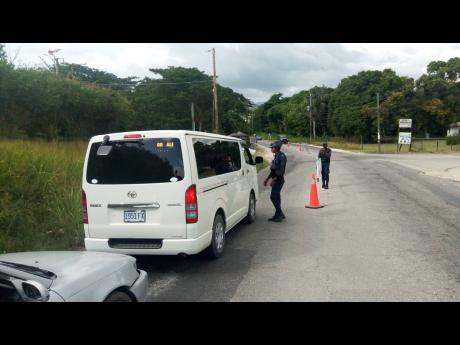 Photo by Hopeton Bucknor
Motorists slow to a halt as police man a checkpoint in Westmoreland.

With the state of emergency (SOE) slated to be lifted at the end of next month, the Westmoreland police are set to deploy a number of mini task forces in targeted operations as the division transitions to normal policing.

Superintendent Robert Gordon, commander of the Westmoreland police, said that his team is forging a strategy to maintain falling crime numbers in what was the bloodiest parish in the first quarter of 2019.

According to Gordon, the police will be carrying out a series of operations to prevent criminals from establishing comfort zones in traditionally volatile areas.

“We will be targeting some areas that we know, by history, would have had a lot of incidents of crime over the years,” Gordon told The Gleaner.

“We are also targeting individuals whose criminal allegations have been made against them in the past and by their history are likely to be involved in future criminal activities.”

The divisional chief said that he expected military reinforcements would remain even after the SOE expires on February 27.

The security crackdown was imposed in Westmoreland, Hanover, and St James on April 30 in a bid to staunch a murder wave in the island’s western arc.

“Public safety will be one of our main objectives going forward, and if the situation should change in anyway drastically, we will make the necessary adjustments,” said Gordon.

Westmoreland has been perennially dogged by daredevil motorcyclists, many of whose vehicles are not licensed or insured. Bike gangs have also been implicated in the reign of terror unleashed on the parish over several years.

“The police and the military have put together a particular plan to deal with these motorcycle criminals, but we will not be discussing these measures at this time,” said Gordon, who noted that the roll-out of that initiative would occur in short order.

“We are very much advanced as to how we will be dealing with crime after the SOE. These players in the crime world must be made to realise that we will be getting into the communities to partner with community residents to promote law and order,” added Gordon.

Since the start of the year, four persons have been murdered in Westmoreland. This is four fewer than were recorded over the comparative period last year.

Data provided by the Jamaica Constabulary Force show that up to December 28 last year, 89 people were murdered in Westmoreland, 37 per cent, or 52, fewer than for the corresponding period in 2018. Shootings also fell by 34 per cent.