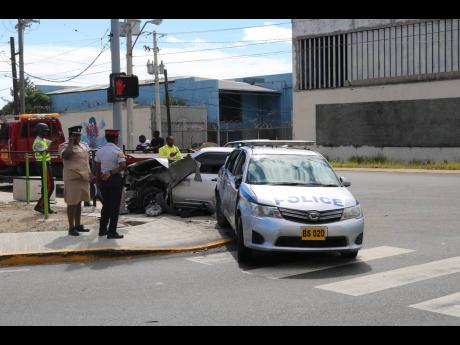 The strength and commitment of an injured unnamed policeman who was hurt in a two-vehicle smash-up at the intersection of Harbour and Pechon streets yesterday afternoon was the talking point among workers from a nearby furniture store, some of whom witnessed the crash and helped in the rescue effort of the six victims.

Two policemen returning from court with an inmate from the Tower Street Adult Correctional Centre were struck by a Toyota Probox motor car. The driver and his two female passengers were also injured.

One of the cops, after being helped from the vehicle by the furniture makers and, according to them, barely able to stand, much less walk, immediately grabbed the handcuffs of the inmate and secured his service rifle until help came.

All six passengers from both vehicles were taken to hospital and treated for non-life threatening injuries.

This brings to at least seven the number of policemen injured in traffic collisions involving service vehicles between Friday, February 21 and Tuesday, February 25, according to police statistics.

On Friday, a corporal was driving a Toyota Corolla along the Richmond main road about 5:20 in the afternoon when it was involved in a collision with another car. The front left section of the service vehicle was extensively damaged

The same night, about 9:40, a constable of the New Market Police Station received a minor injury to his left foot when the Suzuki Grand Vitara he was driving along the Bog to Hopeton main road in Westmoreland crashed after he failed to negotiate a corner. He lost control of the vehicle and slammed into a tree.

The following morning, a district constable from the Hunts Bay Police Station hurt his chest, back and legs in a collision along the Spanish Town Bypass.

On Sunday, a constable was a passenger in a Misubishi Sportero L200 at about 10:20 in the morning when he sustained injuries to the neck after the vehicle ran off the road. A corporal attempted to overtake a bus and lost control of the vehicle which ran into an embankment.

The following day, two service vehicles were involved in separate crashes, resulting in injuries to police personnel as well as civilians.

The first incident happened at 8:30 in the morning when a Toyota D’Max pickup assigned to the Detention and Courts Department and driven by a constable heading to Richmond from Highgate collided with a Nissan Ad Wagon.

Two passengers from the car were taken to the Port Maria Hospital for treatment, while police personnel complained of pain.

The other crash took place about 5:15 in the afternoon when a service vehicle driven by a constable of the Bethel Town Police Station in Westmoreland was involved in a collision with a box truck. No injuries were reported but both vehicles were damaged.