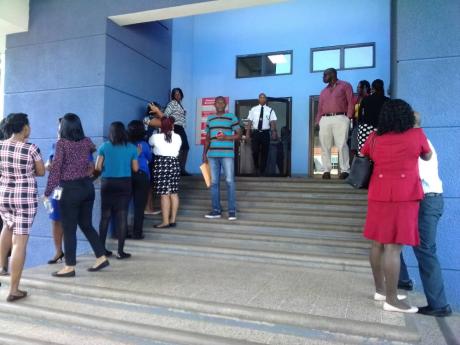 Photo by Hopeton Bucknor
Staff mill around outside the Tax Administration Jamaica building in Montego Bay yesterday. Clerks, cashiers and other staff deserted their posts citing noxious fumes from the building's ventilation system.

Operations at the Montego Bay office of Tax Administration Jamaica came to a standstill on Tuesday morning after dozens of staff walked off the job and staged a protest over noxious fumes in the building.

The employees, including clerks and cashiers, deserted their posts approximately 9 a.m. when the office was teeming with customers.

One employee who spoke to The Gleaner by cell phone said that staff had complained of fumes emanating from the ventilation system since Monday morning.

Customers expressed ­annoyance at the demonstration.

“Me and my son went inside the tax office to process two motor vehicle certificates, and while we were standing at the counter, the clerk who started to process our documents walked away and just left us standing,” a Montego Bay businessman, who gave his name as Ian Wright, told The Gleaner.

“At first we think she had gone to look for a document for us, but it was when we noticed that she was not coming back, and then we ­realised that no worker was ­actually inside the department, did we realise that something was wrong.”

Attempts to get comment from the TAJ’s public relations department in Kingston were unsuccessful.