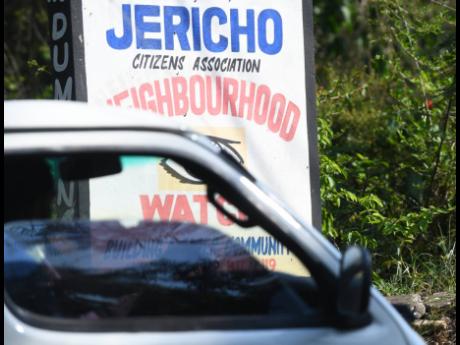 Ricardo Makyn/Chief Photo Editor
A motorist drives by a sign in the community of Jericho, just outside Linstead, in St Catherine yesterday.

The family of a man who returned to the island recently from New York and passed away at his home in Jericho, Linstead, St Catherine, on Saturday, is wracked with concern over whether he might have died from complications associated with the novel coronavirus.

A brother of the deceased confirmed to The Gleaner that the family was taking no chances and that relatives who made contact have been tested for any trace of the virus.

“We are not supposed to be talking to anybody. We kinda just are keeping ourselves to ourselves until 14 days run off or until we get the autopsy so we can know exactly what took place,” the brother said.

“After we get the autopsy result or get the results from our COVID-19 test, we will know because we went to the hospital and got tested.”

He did not indicate when the 14-day quarantine had commenced.

Minister of Health Dr Christopher Tufton confirmed that he was aware of the Jericho self-quarantine case but cautioned that “a sudden-death scenario becomes a police matter” and that a postmortem would give insight into the man’s passing.

Tufton said that the man had died a few days after emerging from quarantine. He is believed to have arrived in the island days before airports were closed to incoming passenger traffic.

The Gleaner has not disclosed the man’s identity because the disease has often been associated with stigma and discrimination.

Thirty of the cases were imported, 22 imported related, and six are under investigation. Fifty-three per cent of confirmed cases are male, while 47 per cent are female. The COVID-positive cases range between 12 and 87 years old.

An eighth person has recovered and has been released from isolation.