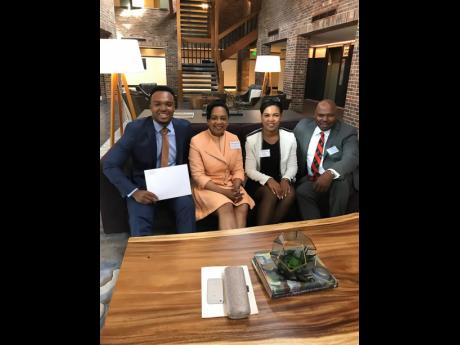 JAMAICAN DR Anita Brown-Johnson said yesterday that she was not shocked that her son Nicholas Johnson’s record of academic excellence paved the way for his history-making exploits as the first black valedictorian of Princeton University.

Princeton confirmed late April that the 22-year-old scholar was the first black valedictorian in the Ivy League school’s 274-year history.

Johnson, who is from Montreal, Canada, was also named valedictorian years earlier at Selwyn House High.

“I feel overjoyed for him because I admire his discipline and his commitment towards his study, which he has always exhibited. There is that joy and happiness for him, but at the same time gratitude for all who have contributed in a mentorship role,” Brown-Johnson told The Gleaner yesterday evening.

Brown-Johnson said that she was proud that Nicholas topped a graduating class of 1,300 at a university ranked number one in the world for undergraduate studies.

“I am surprised he ended up at the very top, but at the same time, I know his capabilities and work ethic which is incredible, so in that sense it’s not so much of a surprise,” Brown-Johnson said.

Johnson majored in operations research and financial engineering and wrote his senior thesis on developing algorithms to design a community-based preventive health intervention to decrease obesity in Canada.

In an interview with CNN, the scholar said that it felt empowering being the first black valedictorian given Princeton’s historical ties to the institution of slavery and said he hopes his achievement motivates other black students.

As a senior, Johnson was employed as a software engineer in machine learning at Google’s California headquarters.

“When it comes to bookworms, they would often not have much of a personality in terms of having difficulty socialising, but that was never the case with Nicholas. He has always been a very balanced student and always very much liked by his peers,” his mother said yesterday.

“He is his own boss and always self-driven. He has always been a leader, so he would always lead the way and carry his peers along in terms of showing them the way or supporting them,” Brown-Johnson, a past student of Excelsior High School, said.

The younger of two children for his parents, Johnson hails from a family of greatness.

His father, Dr Dexter Johnson, a native of The Bahamas, is a dual-degree Harvard-trained physician and oral and maxillofacial surgeon. His mother is an assistant professor of family medicine, an interim chief of the department of family medicine, and director of a secondary-care division. Nicholas’ sister, Anastacia Johnson, is currently completing her Master of Fine Arts and was nominated for four Grammy Awards.

With Princeton’s in-person graduation ceremony cancelled because of the COVID-19 pandemic, it will hold a virtual one on May 31.

In the fall, Johnson will begin his doctoral studies in operations research at the Massachusetts Institute of Technology.