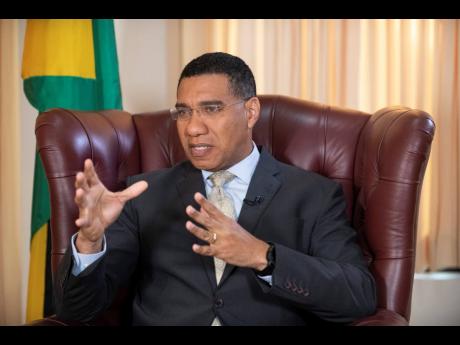 Prime Minister Andrew Holness: "However, the standard of this Government is that statements in the press or general discussions, even with ministry officials, do not amount to offers between countries.”

In a new revelation, the Holness administration is claiming that the United Kingdom’s (UK’s) offer to help build a prison here was “rejected” by the Portia Simpson Miller-led government in 2016 and not the now-ruling Jamaica Labour Party (JLP).

That disclosure and accompanying explanations in a late-evening statement from Holness yesterday were never advanced when Kamina Johnson Smith, the foreign affairs and foreign trade minister, finally gave an update in the Senate on January 13, 2017, six months after opposition member Lambert Brown asked about the status of the offer.

Holness was forced to make the statement after saying at a press briefing last Friday that his Government did not turn down the UK’s 2015 $5.5-billion proposal. That appeared contradictory to the “yes” Johnson Smith said in 2017 when asked if the Government of Jamaica had rejected the offer.

In a tweet on Saturday, the foreign minister said Holness was being “honest”.

And in his statement last night, Holness said the People’s National Party (PNP) administration, which his JLP booted from office in February 2016, had by then “rejected” the offer, saying there was no advancement on a non-binding memorandum of understanding (MoU) that was reportedly signed.

“From the known actions of the PNP, or lack thereof, one could conclude that the PNP had, in fact, rejected the 2015 offer,” Holness said. “I cannot speak for what the PNP accepts as an offer between governments. However, the standard of this Government is that statements in the press or general discussions, even with ministry officials, do not amount to offers between countries.”

Saying the PNP had questions to answer, Holness added that there “was no engagement of the bilateral process to renew or reopen the offer, and certainly, there was no new offer or MoU before us to consider”.

“We inherited a matter,” he said, “that was not pursued by the former PNP administration and for which we had previously declared that we would not ourselves pursue.”

The statement, however, did not explain why Johnson Smith did not tell the Senate that the offer was rejected before the JLP administration formed government and, given that inherited knowledge, why it took the Government six months to answer the questions, although Pearnel Charles Jr, then a minister in the security ministry, told the Senate in December 2016 about a “particular” diplomatic process that needed conclusion before the country was updated on the offer.

After Johnson Smith said the deal was rejected because the terms “were not beneficial to Jamaica as a whole”, Brown asked if there was any attempt by the administration to renegotiate or to seek amendments to the terms and conditions of the proposal. Johnson Smith replied: “I’m not sure it would be appropriate for me to share the nature of discussions and negotiations that may or may not have taken place between government officials on this matter.”

Then Opposition Senator Mark Golding also asked when the deal was rejected, but Johnson Smith declined to answer, saying she needed clearance from the security ministry.

In media appearances after the Senate update, Johnson Smith reiterated the position of the Holness administration, including on Television Jamaica’s ‘Smile Jamaica’ morning programme on January 16, 2017, when she said, “What has been offered has not been accepted.”

Other members of the administration, including former National Security Minister Robert Montague, said the Government preferred support for schools and factories – the long-standing position of the JLP to David Cameron, the then UK prime minister, who announced the offer on a visit to Jamaica in September 2015.

“We thank you for your kind offer,” Montague told Radio Jamaica on January 17, 2017, before adding that “the rejection is not a rejection of the UK. The UK does things in their best interest; Jamaica must do the same”.

Montague, as security minister, was responsible for prisons and met with British officials over the proposal within days of his appointment to the portfolio in March 2016.

British High Commissioner Asif Ahmad, to whom The Gleaner has sent questions, said in October 2017 that the offer was off the table unless Jamaica wanted to pursue it.

Peter Bunting, the security minister when the offer was made, has said he will review the situation.

“To my certain knowledge, there was no rejection,” Bunting said last night.

Jamaicans were outraged at the proposal, which would see the British funding 40 per cent of the cost, Jamaica the remaining 60 per cent, and the return of over 300 Jamaicans serving time in UK prisons.

Jamaica’s prison conditions are widely viewed as inhumane and are back in focus following reports that 81-year-old Noel Chambers died under inhumane circumstances at the Tower Street Adult Correctional Centre, where he had been held for 40 years without trial.