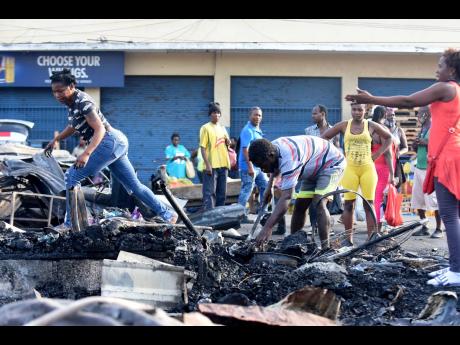 STACY ESCOFFREY looked on in defeat yesterday at her destroyed stall at the Rae Rae Market in downtown Kingston.

It was a case of déjà vu.

“Around 1:30 a.m., my co-worker called me saying fire a burn down the place. From dat mi couldn’t sleep. Mi stress and cry,” Escoffrey said.

The night of drama began with a police team pinned down by heavily armed gunmen Monday night in the Lizard Town area of Tivoli Gardens after cops ordered home hundreds of persons who gathered at a wake being held for an alleged gangster. Coronavirus curfew and social-distancing restrictions make such gatherings illegal under the Disaster Risk Management Act.

The police’s intervention reportedly triggered a fierce firefight between gunmen and the security forces, with arsonists allegedly flattening the market facility while making their escape.

Head of the Corporate Communications Unit, Senior Superintendent Stephanie Lindsay, believes that the market was set ablaze as a decoy.

“Gangsters lit the Rae Rae Market. The team went into the area because they had heard of a gathering of over 200 persons at a wake, so the police asked them to disperse,” said Lindsay.

“After the police dispersed the crowd and most of the people left, they started firing at the police. We had to send in reinforcement.”

Video footage obtained by The Gleaner showed rapid explosions during a shoot-out which forced police personnel to plead for backup. Soldiers and other cops offered rearguard support.

Rae Rae Market has been devastated by fire at least three times in as many years.

Annoyed at being victims of fiery fury, vendors who suffered losses called on Prime Minister Andrew Holness and Mayor of Kingston Delroy Williams to intervene.

Joshua Davis, acting senior deputy superintendent of the Jamaica Fire Brigade, who is in charge of operations for Kingston and St Andrew, said the brigade received the call around 11:54 p.m. Monday. But by the time they reached the location, fire had already engulfed the market.

“We dispatched four units from York Park, Port Royal, Rollington Town and Portmore. We were able to extinguish the fire about 2:30 a.m. and we continued after that with mopping up. All the stalls were lost and around 120 persons were affected. We don’t have a dollar figure of the losses yet,” he said.

Vendor Marva McEwan, who has sold clothing from Rae Rae Market for more than 40 years, was disgusted by the frequent blazes that have gutted the facility. She and others are convinced that arsonists have targeted the market for years.

“This happen all the time and we don’t get any help, so we need help now. We pay market fee every day except Wednesdays,” McEwan said, We need the Prime Minister fi come help us. A corona time now and we hungry.”

“This place constantly a burn down and we have nobody to turn to.”

And Valerie Lambert described the tragedy as a “sin”.

“We have children and grandchildren and we have rent to pay, plus loans and those things,” she told The Gleaner. “... This is not the first, second, third or fourth time. Maybe dem want the land.”