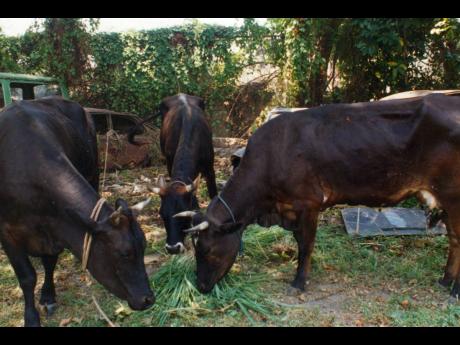 Jamaican public-health inspectors have been accused of being complicit in facilitating the sale of carcasses of stolen animals, a senior agriculture official has said.

The surprise disclosure by Peter Thompson, CEO of the Rural Agricultural Development Authority (RADA), came on Wednesday evening during a virtual town hall hosted by the Praedial Larceny Prevention Unit in the Ministry of Industry, Commerce, Agriculture and Fisheries.

“It is a cultural practice, and it resides within the community, and the community persons know who the culprits are ... . I want to also indicate that there are culprits within the Ministry of Health who presume to be using their stamp to stamp meat that was stolen,” the RADA head declared.

“This was made known to us at a point in time when DSP (Kevin) Francis was head of the Praedial Larceny Unit. He made mention of that.”

Despite being armed with this inside information, it is unclear whether RADA or Francis, who was appointed head of the farm-theft czar in 2015, pursued any cases against the public-health inspectors who are tasked with inspecting and passing all meat for sale to the public as fit for human consumption.

Where the carcass of an animal is deemed to be unfit, it is the responsibility of public-health inspectors to so indicate and make arrangements for it to be disposed of.

Since 2010, annual losses to farm theft in Jamaica have been conservatively estimated to be in the region of $5 billion-$6 billion.

Meanwhile, Deputy Commissioner of Police (DCP) Clifford Blake admitted that despite mounting evidence that farmers are often killed while trying to stop the theft of their crops and livestock, the police continue to treat farm theft as a trivial matter

“A lot of our officers, in their effort to treat with murders and other violent crimes, sometimes they tend to push praedial larceny to the background. They do not give it the priority that it deserves,” said Blake.

“So we can no longer treat praedial larceny as persons merely stealing an orange or a bunch of bananas. It has become an organised crime,” the senior cop said.

Blake disclosed that for the five-month period January 1 to May 31, there were only 22 cases of farm theft reported to the police throughout all of Jamaica, indicating that there was massive under-reporting of the problem.

“Whilst the figures at the stations might be true, off the top of my head, in St Elizabeth, where I am from, I could name you 22 cases since the beginning of the year,” said Blake.

And after listening to various plans about the use of drones, mobile phones, forensic evidence, and other high-tech measures, president of the Red Poll Cattle Breeders Society, Martin Hopwood, poured cold water on the initiatives.

“... The reason why only 22 cases of praedial larceny have been reported is because the farmers are fed up. They can’t bother go to the police because they only wasting their time, they not getting any results,” the cattle breeder president said.

Hopwood, who admitted to spending J$3 million a year on security for his farm, said he still suffers at the hands of cattle thieves.

“There is not one small farmer that I do business with who has not lost at least 10 per cent of his herd to praedial larceny, and I don’t know how they persist because it is the most demoralising thing,” he said.