Jamaica looks to spice up business with Costa Rica 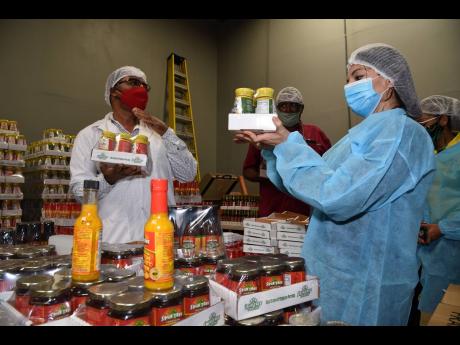 JAMAICAN EXPORTERS have failed to take full advantage of the country’s trading relationship with Costa Rica. Jamaica has a duty-free trade agreement with the Central American country, the Jamaica Manufacturers and Exporters Association (JMEA) disclosed on Friday.

“We have the opportunity to sell more goods to Costa Rica under our free trade agreement and it is a market that we need to look more closely at in terms of how we can expand,” said Executive Director of the JMEA, Imega Breese-McNab.

This disclosure came during a tour of the Spur Tree Spices facilities at the Garmex Freezone, 76 Marcus Garvey Drive, to witness the company’s first shipment to Costa Rica, valued at US$30,000.

“It is underutilised,” Breese-McNab added.

The export opportunity arose out of an email Director of Spur Tree Spices, Mohan Jagnarine, received more than a year ago, saying that the boss of a store, Telemundo, had come to Jamaica and bought some of its products and was desirous of sourcing additional goods. More than a year later, the deal was sealed after much legal work but with Jagnarine still concerned about the high level of red tape involved in doing business in Jamaica.

“The problem with doing business in this country is bureaucracy. There is still too much of it and some of the things are so stupid it’s not funny.

Jagnarine explained that achieving and maintaining export success means much more than just getting your products on a shelf in a foreign country.

“You cannot just put something out there and expect it to sell,” the businessman advised. “You have to do the groundwork, so I will be going down there to teach the people how to use our sauces, how to cook with them.”

Meanwhile, Chargé d’Affaires of the Embassy of Costa Rica, Gina Guillen Grillo, disclosed that with an estimated 65,000 Jamaicans living in her country, the Spur Tree products have a very good target audience.

She explained that in the province of Limon most people there are of Jamaican descent who have maintained their culinary tradition, among others, and still speak Patois. She also reminded the touring party that Jamaica’s first National Hero, Marcus Garvey, spent some time there during his sojourn across Central America.