Mentally ill man gets bail after 20 years behind bars 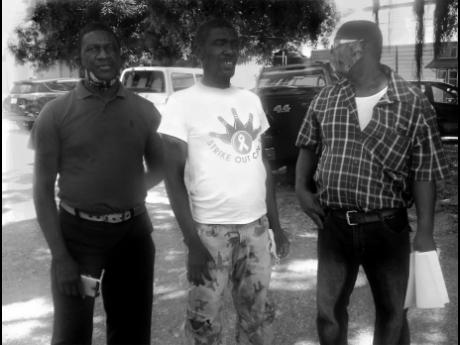 Contributed
Mentally challenged farmer of St Elizabeth, Abraham Lawrence (second left) and his brothers outside the Black River Parish Court yesterday, where he was offered $10,000 bail.

Forty-nine-year-old Abraham Lawrence, one of several mentally challenged persons, who had been locked away in state custody for two decades, was granted bail in the St Elizabeth Parish Court in Black River yesterday.

Lawrence, whose $10,000 bail was posted by his older brothers Silvan and Llewellyn Lawrence, had spent the majority of his time in state custody at the St Catherine Adult Correctional Centre. He was arrested in 1999 after a stone he threw at another man broke the side glass of a police car.

“Mi glad fi come out, mi glad fi come out,” a relieved Lawrence declared. His brothers were also pleased that their sibling’s protracted ordeal behind bars had ended, at least for now, pending the conclusion of the case against him.

Silvan, the seemingly more emotional of the two brothers, was almost in tears as he revelled in the release of his brother, who is expected to spend his first night of freedom in his care. While the state record said his brother was arrested in 1999, he is insisting that the date given could be five years too short.

“Mi remember clearly when it happen, him and some man inna the community did have a argument an dem lick him wid stone. A fling him a fling back after dem when him bruk de side glass pon a police car, and from that day, dem lock him up,” recalled the brother, who is insisting that the incident took place in 1994.

“A nuff time mi try fi get him out, and back inna dem days deh, him go a court but dem seh him nuh fit fi plead, and just carry him back go lock him up,” added the brother.

Fought to free him

The overjoyed brother said it was not for a lack of effort why his mentally challenged sibling was locked up for so long. According to him, he even made contact with Jamaicans for Justice at one point, but never got the result he desired and as a consequence, his brother basically became lost in the penal system.

The other brother (Llewellyn) said Abraham was not born with a mental problem but he became depressed after a bad experience in which he was robbed.

“Back in the days, he was a ganja farmer. One day, he went to sell ganja to some men in Montego Bay, but they robbed him and stole his ganja. Since that day, he started to drink and smoke heavily, and this was what affected his brain,” the brother said.

When Lawrence (Abraham) appeared in court yesterday, his attorney, Yushaine Morgan, told Justice Ann-Marie Granger that having considered the length of time his client had spent behind bars, and the fact that his brothers are willing to take care of him, he is requesting bail for him.

Before granting the request, the judge asked why there was no psychiatric report presented for Lawrence. She was told that the psychiatrist at the St Catherine Correctional Centre has been ill for days and did not have the chance to meet with the mentally challenged man.

Hugh Faulkner, executive director of the Legal Aid Council, told The Gleaner that he was pleased with the latest development with Lawrence, noting that his department had assisted in getting Lawrence out of custody.