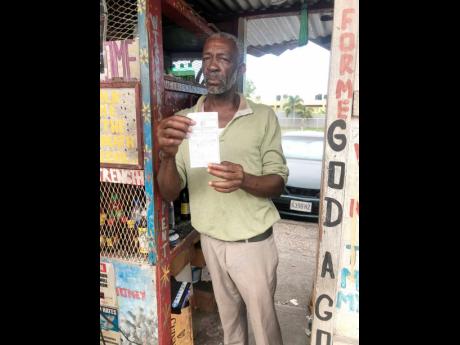 Andre Williams PHOTO
Everton ‘Shut’ Richards displays a copy of a receipt he received from the Constant Spring police after reporting at least three break-ins at his stall on Mannings Hill Road in St Andrew.

COVID-19 and the nightly curfew restrictions imposed by the Government have hit an elderly Mannings Hill Road vendor in his pocket, after being the target of thieves three nights this week.

Vendor of 25 years, Everton ‘Shut’ Richards, 58, said he has never experienced anything near this type of infringement, which has caused him to lose his nights rest and money.

Richards is uniquely popular in that section of St Andrew for his 24-hour kerbside dependable service. However, popularity did not deter thieves from breaking into his stall at will during the nightly curfew hours.

He told The Gleaner that daily he served his loyal customer base, closed the business and left the street for home in Red Hills.

The incidents which occurred Sunday, Wednesday and Friday saw Richards losing close to $100,000.

He has reported the matter to the nearby Constant Spring police and showed The Gleaner his receipt.

“Monday morning mi come down here and dem tek out everything out the stall and me go report it up a station. Wednesday morning again mi see the same operation and last night mi inna mi bed 2 o’clock and mum answer the phone. The police say mi must come secure me things cause dem invade me stall.”

Richards was displeased that although he got a call, the police did not apprehend anyone.

“The police tell me bout him see man with drinks and a madman. How him know is a madman … before the man hold di man same like how him call me out mi bed. Why call mi and you nuh hold di man and a unuh alone fi deh pon di road.”

The Gleaner understands that the thieves used an object to pry the lock on the door open and took away several items.

Richards told our news team that the thieves made off with more than 10 crates of bottles, an assortment of rum, liquor, lighters and cash during their spree.

He is broken, even as he contends that his stall once operated 24 hours, free of trouble.

“A from the curfew time because me never used to lose. This place never have on nuh door, a di last five years door put on it. Mi out here around 23 years and dem things ya never used to happen, a wah gwaan,” he questioned.

The Constant Spring police told The Gleaner that a report was made to them and an investigation was under way.

Customers, who stopped by to shop, on learning of the repeated theft were alarmed at the development.

A customer told The Gleaner, “Everybody in St Andrew depend on ‘Shut’ 24 hours and the curfew cause him to lock up his place and people a rob him, that is slackness. The police must put a stop to it.”