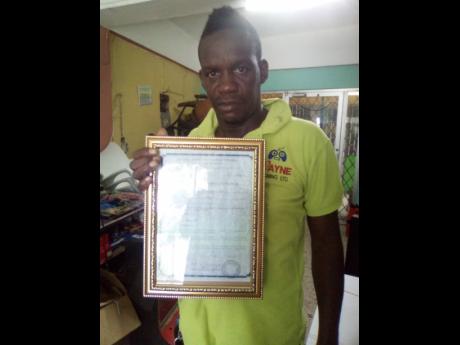 Contributed
Wayne Henry shows off his licence to operate from the Betting, Gaming and Lotteries Commission.

To say that St Catherine businessman Wayne Henry tried his hand at everything before finally finding success would not be such a stretch. His hard work and determination have taken him from pushing a handcart to being the owner of a viable business and a BMW motor car.

After leaving home in Chapelton, Clarendon, at age 15, he went to Spanish Town in St Catherine and lived on the streets for months, seeking out odd jobs to make a living.

“I had no family support and no preparation made for me. It was very rough,” Henry told The Gleaner as he reflected on his journey.

His first gig saw him washing cars for a stipend and food daily until he got an opportunity to care for someone.

When that ended, Henry found himself on the move again, heading to Gregory Park in Portmore, St Catherine, where he was again washing vehicles but soon lost that job.

Not one to give up, he returned to Spanish Town and decided to transport goods for shoppers and business operators to earn his keep, but that also proved challenging.

“I started to push handcart in Spanish Town to earn a living, but most of what I made had to be paid for rent to the cart owner, so soon, I was bankrupt,” said Henry, who pointed out that he learnt to read the newspaper at age 10.

He then became a bus conductor, during which time he was able to make his first trip abroad.

“I was working from Portmore to downtown Kingston when I met a lady who said that I seemed to be a determined person. We became acquainted, and I started to accompany her to buy goods,” Henry said.

Soon, he started to travel to Panama for her to buy goods, and she lent him US$2,000 to jump-start his own enterprise.

“I was given the chance to do business for myself. I then started with rice, but the money messed up and the rice gathered weevil. I had to repay the money, but I still didn’t stop there,” Henry said.

His venture selling refined cornmeal and juices also failed before he finally found success in the gaming industry.

Now, the father of two and proprietor of Wayne’s Gaming is proud of the progress he has made.

Having moved from Clarendon 33 years ago with nothing and facing many trials, he now employs 13 persons in his business venture.

Henry said that his breakthrough came after meeting businessman Billy Clarke, who gave him a chance to realise his potential.

“I currently operate businesses in Portland, Mandeville, Marlie Mount, and St Ann,” he said proudly of his certified operation. “My aim is to expand to the Caribbean in the next five years and continue to [improve] lives.”

Customers can pick from a range of games, including horse racing, joker poker, roulette, and pot of gold.

“The problem that is present is the unavailability of parts to service the machines, but with determination, we are still going,” Henry told The Gleaner.

He said his drive to succeed is grounded in the belief that one should never give up despite life’s challenges.