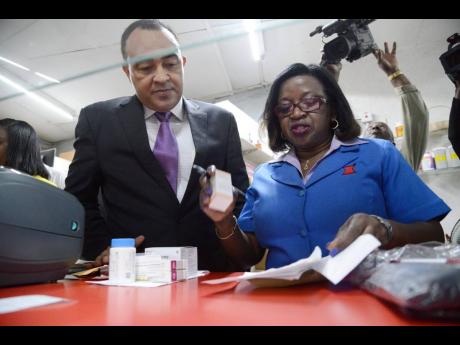 Pressure is mounting on Jamaican health authorities to review the regimen for the dispensing of a crucial drug in the arsenal for treating COVID-19, which has killed 139 people here and threatens greater tragedy with positivity levels on the weekend trending at almost one in three persons.

Supplies of remdesivir, a drug on clinical trial that was administered to United States President Donald Trump recently, are sourced by local hospital pharmacies from overseas merchants on a per-prescription basis, Jamaica’s chief pharmacist group has said. Delivery may take two to three days to reach patients in intensive care units who present with oxygen deficits.

That window of delay could compromise clinical care for COVID-19 patients, Pharmaceutical Society of Jamaica President Ernestine Watson has said.

Watson was cautious in her assessment of the consequences of the time lag for the coronavirus drug but was willing to suggest that favourable outcomes could be heavily influenced by timely intervention.

Those circumstances have prodded the Pharmaceutical Society to lobby the Ministry of Health and Wellness to stagger the inventory of remdesivir, or its generic derivative, at hospital pharmacies so that they will have sufficient medicine to dispense quickly as Jamaica’s coronavirus crisis worsens. That would mean bolstering supplies beyond individual prescriptions.

“Studies have shown that the benefits improve when you start them (COVID-19 patients) earlier, as soon as there is a need for oxygen,” Watson told The Gleaner on Sunday.

The Pharmaceutical Society does not, however, approve of private pharmacies having access to remdesivir.

Watson, who said she was aware of a flurry of frantic calls to private pharmacies by desperate relatives of coronavirus patients, believes that a drip-drip reliance on remdesivir approvals from the Standards and Regulations Committee of the health ministry was a bottleneck that slowed action for those in immediate need of intervention.

“By the time a patient needs a prescription, another person will need one,” said Watson.

That warning comes at a critical juncture in a second, more lethal wave of COVID-19 in Jamaica, with the positivity rate lurching dangerously high at between 25 per cent and 31 per cent over the weekend.

Data from the Ministry of Health and Wellness showed returns of 196 positive results out of 634 test samples for October 9. A day later, there were 159 positives from 633 samples.

That means that Jamaica’s positivity rate of 31 per cent on Friday, doubling from 16 per cent 24 hours earlier, was around seven times the global optimum of four or five per cent.

Among those who died with the disease on the weekend was Dr Lennie Jackson.

“The science on the actual physical impact on the brain with COVID is increasing. We think it is creating changes in the brain, which we are still looking at. So we think that there are some neurochemical changes mediated by the COVID conditions,” he said.

“We see patients who were fine, went in, did their two weeks or however long of isolation, and came out traumatised, meeting the criteria for post-traumatic stress disorder (PTSD), just from being around people who were dying, and you were not sure if you would be next ...,” said the former chief medical officer for the health ministry.

Other individuals, De La Haye said, have appeared disoriented after returning from isolation.

“Everything else is fine. Patient is admitted and discharged, but the patient does not recognise his house and thinks he is somewhere else where he lived 20 years ago. We are seeing others who were fine before, no history of anything, and suddenly becoming psychotic after hearing that the test was positive. The person has since recovered nicely (physically) but started hearing voices,” De La Haye told The Gleaner.

De La Haye said that “the fear of infection was driving anxiety in others and leading to depression”.

But the emergence of mental-health worries may be exacerbated because some drugs are in short supply.

“I have had to make adjustments with the products I prescribe. People have their choice products, and I have mine that I prefer to write, and they are out of supply. We are having that issue,” said De La Haye.

Among the mental-health drugs in short supply are clopixol drops, a remedy used in the initial treatment of acute episodes of mental disorder or worsening chronic mental conditions.

Some benzodiazepines, such as diazepam, alprazolam, and clonazepam, are affected intermittently, Watson told The Gleaner.

Watson also confirmed that pharmacies were not getting their regular quotas.

“Orders have been delayed. What we’re finding in the market is that there are shortages, but it doesn’t last very long,” she said.