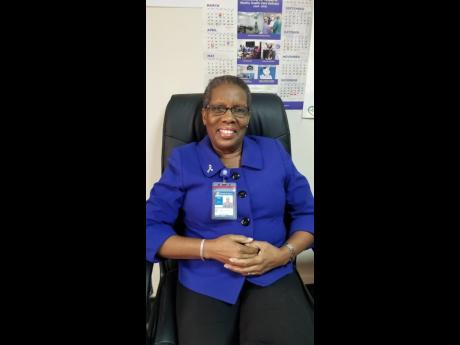 For years, Lisa had tended to patients as a nurse, but in 2017, she found herself in need of care after her husband of more than 10 years stabbed her three times in the chest and shot her in her back in a fit of rage.

Lisa, 38, said she knew her now ex-husband had been abusive prior to getting involved with him in 2005, but she decided to give their relationship a chance because she felt he had outgrown his abusive tendencies. In 2006, they had a son and were married a year later.

Her ex, a former correctional officer, would drink, gamble, come in late and occasionally hurled insults at her, but the nurse said he didn’t become physically abusive until about 2016. She recalled him hitting her one day as she ironed, and there were days he would pin her down and demand sex from her.

“By this time, I came out of the room where we were living. I said to him, ‘I can’t deal with this no more. You need to stay on one side of the house and I stay on the other side’, so I was in the children’s room,” said the mother of two.

Lisa became even more fearful after her husband got a gun, and on one occasion, she recalled him putting his hands around her throat.

“When he came home in the hours of the night, he would be clicking the firearm and I would speak to him about it. I told him that he needs to stop doing that,” she recounted to The Gleaner.

“I couldn’t leave the house in peace, especially in the mornings when I was going to catch the bus to go to school, because by this time, what he started doing was that whenever I wake up, is like him wake up, too, and was following behind me to the point where one morning, he took out the gun,” Lisa said, while explaining that her ex would demand that she get in his car instead of taking public transportation.

Things got so unbearable that she decided to report him to the police and eventually took out a restraining and maintenance order through the court. The day the police served him the papers – May 13, 2017 – was the day Lisa almost lost her life. Fortunately, a neighbour rushed her to the hospital in time, although the wounds caused severe liver and kidney damage.

Lisa now lives in another Caribbean country, while her husband is behind bars.

Ophelia Wollaston, a 39-year-old nurse who was employed at the St Ann’s Bay Regional Hospital, was not so fortunate. Her ex-boyfriend shot and killed her on October 27, 2017 outside a supermarket in St Ann. The mother of two young children had gone to the St Ann’s Bay Police Station and filed a report against her ex just minutes before she was shot dead.

In January of this year, Corporal Doran McKenzie, a 34-year-old Jamaica Defence Force soldier, stabbed and shot his common-law wife Suianne Easy to death, before turning the gun on himself. Easy was a practical nurse.

Nurse Claudett James said those in the profession are concerned about the increasing number of cases of domestic violence among their colleagues and within the wider society. This has spurred nurses across the island to join forces to embark on a campaign to end domestic violence.

The project is an initiative that falls under the Nursing Now project, which was launched in February 2018. This project is a three-year global campaign that is being done in collaboration with the International Council of Nurses, the World Health Organization and the Burdett Trust for Nursing.

The project is even more timely now, with October being observed as Domestic Violence Awareness Month. According to the Women’s Health Survey 2016, one in four women in Jamaica has been physically abused by a male partner.

James, the coordinator of the local arm of Nursing Now, noted that domestic violence is also a healthcare issue.

The nurses have designed a referral form which can be given to suspected victims of domestic violence when they seek treatment at health facilities. That form is currently being vetted by the Ministry of Health and Wellness. There are also plans to train more than 500 nurses and midwives across the four health regions to be able to identify persons who are survivors of domestic violence. Training will be done by the Pan American Health Organization.

“This project is going to evolve into a programme. It is not that we are just going to train the nurses and in July next year, everything packs up and we go home. It is something to be continued,” James said.