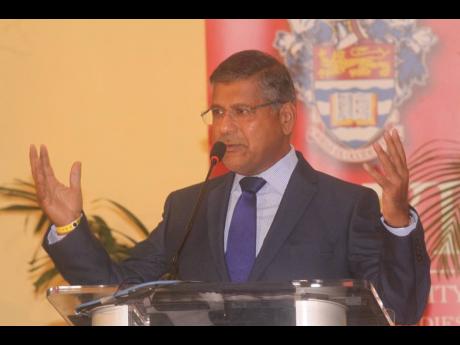 British High Commissioner Asif Ahmad has labelled as “insanity” the practice of running utility cables above ground in a hurricane-prone country as he urged town planners to also upgrade sewerage systems as they push for development.

“What you also see is the reflection of insanity, where electrical cables continue to be located over ground in a hurricane-prone region, it is imperative that they go underground,” said Ahmad as he addressed architects as well as towns and city planners at the inaugural University of the West Indies (UWI) Mona Western Jamaica Campus’ Caribbean Sustainable Cities Conference this week.

He urged them to consider rerouting electrical cables to avoid to avoid accidental contact in event of a disaster.

His comments come weeks after residents of Hope Pastures in St Andrew won an appeal against the Jamaica Public Service Company in a long-running case over the decision of the electricity company to demand that they assume the expense for their underground power distribution system.

Turning to the issue of old sewerage systems, Ahmad told his audience that they should not ignore them as they seek to build out sustainable cities in Jamaica and the wider Caribbean.

“In London, Kingston and in many great cities in the Caribbean, if you dig below the surface, what you’ll see are crumbling, ancient sewerage systems that are in desperate need of an upgrade,” the British envoy said while delivering the keynote address.

He said that a failure to address dilapidated sewerage systems could have adverse effects for other industries, including tourism, noting that even some beaches are polluted with sewage.

“We are overrun with sewage and the prestige beaches on brochures that you see betray another reality, which is, they are carrying a dangerous level of untreated sewage,” Ahmad said.

Research has shown that Jamaica and other countries in the region have been suffering from a growing wastewater management problem for several decades.

Additionally, untreated wastewater from cities like Montego Bay – which is bursting at the seams with the numerous unplanned developments creating a strain on its drainage system, which is regularly compromised by flood rains – often end up in some of the city’s famous beaches and attractions.

Dr Patrick Prendergast, director at the UWI Mona Western Jamaica Campus, said the conference’s mandate revolved around developing an understanding of climate change and its impact.

“This conference really is about encouraging what we see as well-needed dialogue and engagement around critical issues related to the sustainability of cities. It is about building critical partnerships and advancing the sustainable cities agenda,” he explained.

“One of the major challenges to sustainable development is the fact that the world is becoming more and more urbanised, and as we know, urbanisation itself carries with it several critical concerns, including public safety, security, and health,” added Prendergast.