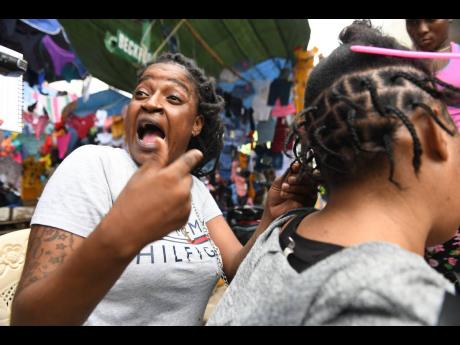 Gladstone Taylor/Multimedia Photo Editor
Nastassia Findley says the COVID-19 pandemic is set to ruin Christmas for her and her family. As she combed a customer’s hair in downtown Kingston yesterday, she also lamented the cancellation of the year end fireworks on the Waterfront. 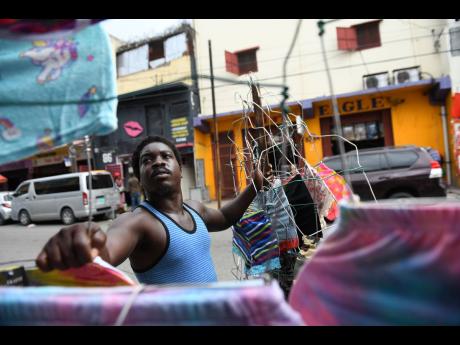 Gladstone Taylor/Multimedia Photo Editor
Clothes vendor Jeremiah Bryan, who operates on Orange Street in downtown Kingston, says that relaxing the COVID-19 curfew for the Christmas season is not worth the risk.
1
2

Vendors in the busy downtown Kingston commercial district are on edge as the Government ponders whether or not to relax COVID-19 restrictions for the festive season. While some want more breathing room to operate and rake in earnings in a year characterised by low sales, others believe the restrictions are a necessary sacrifice to guard public health.

Nastassia Findley, a cosmetologist on Princess Street, was up in arms about the decision by the Urban Development Corporation to cancel the annual Fireworks on the Waterfront New Year’s Eve event.

“We down here carry it here as our history with us. All different nation sit down and wait pan our fireworks and you waa tek weh history?” she asked.

As she combed her first hair for the day, she opined over being dealt the short end of the stick.

She laid the blame for the continued COVID-19 outbreak and the negative effects from curtailment efforts squarely at the feet of Prime Minister Andrew Holness.

“This coulda stop from day one,” she said, blaming poor decisions and ineffective management of persons who entered the island and who should have been in quarantine for wrecking Christmas for her and her family.

Amid the hustle and bustle on the street side, which she looks forward to daily for light relief and unrestrained laughs, Findley flipped back to January 1 in anguish.

“Last year New Year’s when me deh down there and fireworks start, a cry me cry and hold me baby and say, ‘Thank you, Father God, fi mek me and my youth can live fi see a next year’,” she said, disappointed at the cancellation of this year’s spectacle.

Like many other vendors in downtown Kingston, she exclaimed that all is at nought with strict COVID-19 restrictions.

Just around the corner from Findley’s set-up, nail technician Sophia King said that, in all her 20 years of juggling between clothes and nails on Beckford Street, this Christmas season she is like a broken record, repeating just one word from the top of her lungs: “Murder!”

Instead of Christmas carols, it was disappointment that kept ringing in. On a normal Grand Market night, she said, she would see up to 50 customers doing hair and nails. This year, it’s all gloomy.

“If dem come and say dem have $500, we just haffi work with it because nothing nah gwaan,” she said about slashing prices in the current economic situation. “Mi haffi work with dem same way because mi nuh waa lose dem.”

Clothes vendor Omar McKenzie pointed out that the streets of downtown Kingston usually look like a colourful quilt covered in clothing as stylish statement pieces hang in the air during the Christmas shopping season.

“It’s usually beautiful,” he said, “but, now, everybody haffi a watch fi see wah a go happen before dem buy up stock.”

Some vendors were angered by others who suggested that the Government should maintain strict curfew hours to control the pandemic. They said that it should instead relax the measures in the name of Christmas.

They agreed, however, that the restriction on entertainment events was at the root of the plunge in business.

This year, they are expecting to rake in a mere 25 per cent of what they earned last year, as the greater part of their profits was earned by staying out late or all night to catch sales between December 14 and 25.

“Christmas is a busy period for commerce activities, and the relaxation of restrictions has to be balanced, as the Government has been doing with public health considerations, to manage any increased spread in the virus and any subsequent increased pressure on the public health capacity,” Private Sector Organisation of Jamaica President Keith Duncan has said.

This sentiment is also shared by Richard Pandohie, head of the Jamaica Manufacturers and Exporters Association, who is lobbying for relaxed curfew hours during the Christmas season, to boost economic activities.

Kingston Mayor Delroy Williams says that he is continuing to “monitor the status of the municipality on a daily basis” and at an appropriate time will speak to the protocols for the festive season.