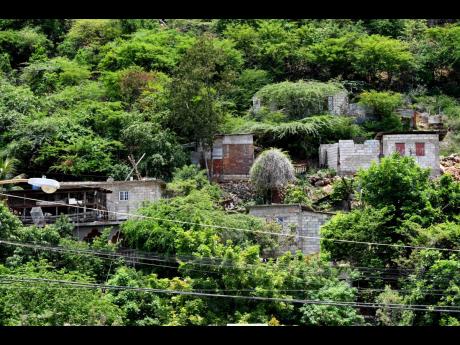 File
This May 2018 file photo shows a section of a squatting community on the hill behind Duhaney Park in St Andrew. 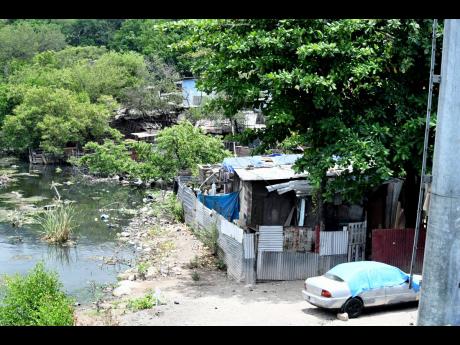 File
A section of a squatting community in New Heaven, St Andrew. 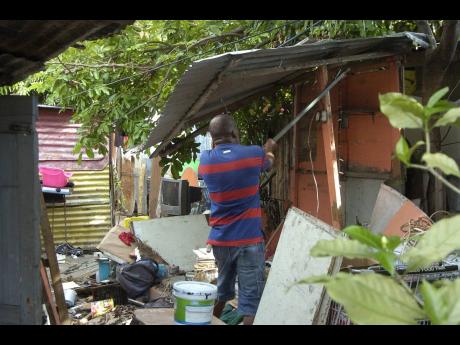 File
In this October 2016 photo, a man desperately tries to remove a piece of zinc attatched to his former home as residents were on high alert awaiting imminent eviction from the 85 Red Hills Road community. 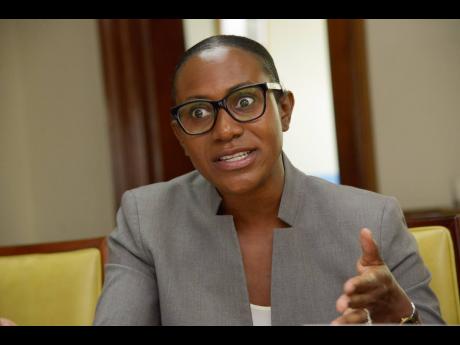 Scores of illegal settlers across the island have been legitimised as landowners for properties they have occupied – some for decades – despite concerns that some of these settlements could expose lives, properties and the environment to danger.

Several residents in sections of St Catherine were among the most recent settlers made landowners, removed from among an estimated one million squatters.

Squatting has benefited both major political parties for decades, providing pockets of voters who usually heavily support one party or the other. Hence, it has become a social, economic and political issue.

Following heavy rains and devastating floods late last month into early November, St Andrew East Rural Member of Parliament (MP) Juliet Holness acknowledged that residents in sections of the constituency should be relocated and that there may be a “political price”.

Efforts to relocate squatters in various constituencies across the island have often been resisted by MPs, especially those in marginal seats.

Ayisha Robb-Cunningham serves the twin roles of representing individuals seeking to possess land overtaken by squatters, and as a board chairman recommending squatters for titles.

“Land Administration Management Programme (LAMP) came about to assist with land titling, so that persons who have been living and being in possession on lands for 12 years can get titles. When LAMP merged with the National Land Agency (NLA), the department of NLA that now deals with that is the Land Adjudication and Management Division,” she told The Sunday Gleaner.

“The attorney to adjudicate is appointed by the minister of economic growth and job creation, which I believe is still under the Office of the Prime Minister. He appoints a chairman through the representatives in the constituency. The areas are zoned by way of the areas in which the occupants (persons seeking ownership) live,” Robb-Cunningham further explained.

She is current chair for the board for the Naggo Head division in St Catherine South. Among the board members are a registered land surveyor and a justice of the peace. All such boards are chaired by an attorney-at-law with at least 10 years in corporate practice.

Disclosing that attorneys may sit for others but within the parish, Robb-Cunningham said that on October 1, she sat as chair for another division as the attorney chairing that board was unavailable. Squatters in Riversdale and Glengoffe were granted orders for possession.

“The decision from the board chair stands. Prior to the amendments, the record of decision would go back to the referee. Now, when the decision is taken and signed, the only thing that is left is for the matter to be sent to the registrar of titles for one to be issued in the person’s name,” she explained.

“Persons seeking possession must physically present themselves before the board, and in most cases I have seen, there is a 70 per cent approval rate ... . Between June and October 2020 about 50 persons were granted orders,” she told The Sunday Gleaner.

Meanwhile, the NLA held other adjudication meetings in several sections of the island between October 29 and November 17, including in Mandeville, Brown’s Town, Yallahs, Bull Savannah, Black River, Oracabessa and May Pen.

While some individuals have been successful in gaining titles to properties they occupied, a cloud of uncertainty still hangs over the heads of many others.

In her other role seeking redress on behalf of a client, Robb-Cunningham said a writ filed on behalf of her client Paul Mullings for a Lyndhurst Road property in St Andrew in September has not been signed off on by the courts.

She said the owner is motivated to sell, especially after attempts to evict occupants resulted in threats to his life.

Councillor Dennis Gordon told The Sunday Gleaner yesterday that he has been negotiating in good faith with the owner, but there has been no definitive word.

“The government valuation for the property is $15 million. An independent valuation done said $18 million. The process is that the sale price is the [sum of the] two valuations divided by two, but the asking price is $30 million. I don’t know where that comes from,” Gordon said.

“The MP, Dr [Peter] Phillips and I have made good-faith promises to the occupants, some of whom have been there for 50 years, and we intend to deliver on those promises. I am prepared to negotiate with the owner, and that is why the $5 million deposit has been paid,” Gordon added.

He said eviction notices being served were nothing more than strong-arm tactics.

Robb-Cunningham said the life of the writ is six months which expired in July, and the second one filed in September cannot be served because the court has failed to sign off on it.

No further word has been heard about the property at 85 Red Hills Road in St Andrew, which was the scene of demonstration in 2016.

A notice was published December 21, 2016 over the name of Andrew Holness, minister of economic growth and job creation and minister of housing. It said that the Government had served notice of The Special Improvements (Infrastructure) Area 85 Red Hills Road, St Andrew, (Inspection, Objections and Representations) under the Local Improvements (Community Amenities) Act, which gives the minister power to declare an improvement order for any land, settlement, building or tenement.

Section 4(a) of the act says: “No person shall evict any tenant who is in occupation of any land within the area covered by the order or terminate any existing tenancy of such land without obtaining prior approval of the minister for proceeding with such eviction or termination.”

St Andrew North Central MP Karl Samuda told The Sunday Gleaner yesterday that both properties at 85 and 85 1/2 Red Hills Road were acquired by the Government during his tenure as minister without portfolio in the Ministry of Economic Growth and Job Creation. He added that he was not aware of the cost to purchase the properties.

Samuda had earned the ire of the legal profession after public comments that any judge who ruled against the residents would not be tolerated.

Weeks of trying to reach Dr Wykeham McNeill, former MP for Westmoreland Western, have come to naught as The Sunday Gleaner tried to get an update on the outcome of discussions for regularisation for more than 400 households and 1,000 residents of Little Bay who faced eviction in 2018.

Churches have also lost lands to squatters, and one clergyman has accused politicians of actively encouraging the practice.

“A politician sent a list of names of persons to be given preference for titles to a section which has been taken over by squatters. The church took a decision not to be in any fight with those squatters and was seeking to give them the lands, but put measures in place so that no more land is siphoned,” said the representative of an established church last Friday.

The church official, who requested anonymity, was not authorised to speak on the issue but has been advising his denomination.

“Once that decision was made, the list from the politician came. We disposed of it because we later found out that only supporters of his side were on the request list,” the clergyman said.

The Moravian, Catholic, United and Baptist churches have reportedly lost more than 4,000 acres of lands to squatters over the years across the island’s 14 parishes.

Utility companies, such as the Jamaica Public Service (JPS) and the National Water Commission (NWC), have also been battling illegal occupation of properties.

Having been sustaining heavy losses to illegal connections, the JPS called for amendments to the laws to allow squatters to apply for and receive electricity service six years ago. Then JPS head Kelly Tomblin had said that an estimated 200,000 households were involved in electricity theft islandwide, which contributed significantly to billions in lost revenue.

Proof of ownership to property, identification, including taxpayer registration, are required to receive service. The requirement remains.

JPS contractors sent to remove illegal connections from its power lines in squatter communities have also been attacked.

Last year, attempts by the NWC to evict squatters from a Gordon Town road property for reported expansion were also rebuffed. They remained on the property up to last week, but NWC officials were not prepared to discuss the issue when contacted.

Deeply rooted in landlessness from slavery, the Government said that ramping up housing solutions will not solve the squatting crisis.

“People squat for so many reasons, primarily because they don’t have adequate alternatives or have not availed themselves of adequate alternatives,” Minister of Housing, Urban Renewal, Environment and Climate Change Pearnel Charles Jr said last week. “It becomes a generational handicap, and there are several socio-economic variables that are connected to squatting, not just a housing solution.”

The Government has also intervened over the years, putting in infrastructure and attempting to develop squatter communities, but Charles said there was need for proper identification of the numbers for medium- and long-term projections and planning.

Despite a policy framework for the divestment of state properties, the last one in 2015, its practices over the years have been viewed as enabling to the crisis. Signed by then minister, Robert Pickersgill, the policy said it would ensure divestment in an efficient, strategic, transparent and effective manner, thereby broadening the base of landownership in Jamaica. However, preference has been given to individuals requiring large swathes of properties which are leased for long term, while existing occupants are discarded.