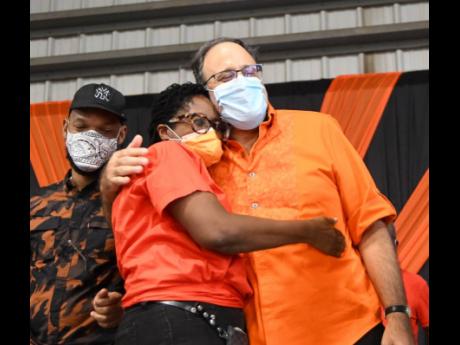 Rudolph Brown/Photographer
Mark Golding, president of the PNP, comforts Angela Brown Burke, who failed in her bid for the chairmanship of the party on Sunday. Also in photo is Raymond Pryce, who was defeated by Dayton Campbell in the race for general secretary. 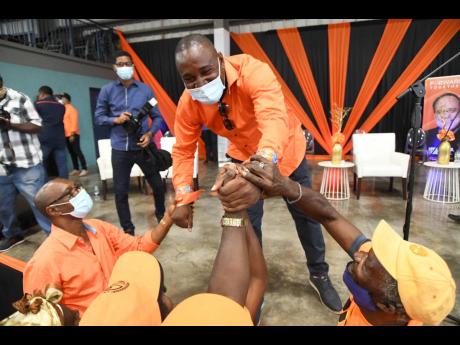 Rudolph Brown/Photographer
Newly elected General Secretary Dr Dayton Campbell greets supporters of the PNP during a meeting of the National Executive Council at Jamaica College in Kingston on Sunday. 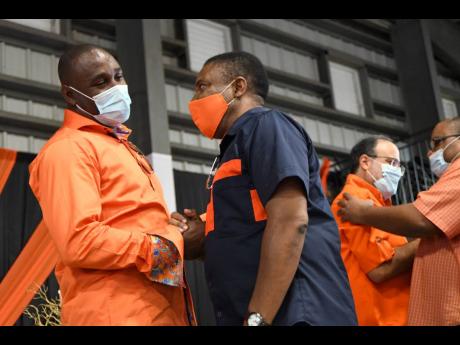 The National Executive Council (NEC) of the People’s National Party rejected the newly elected President Mark Golding’s strong plea for Dr Angela Brown Burke to be the party’s chairman, shutting out the sole female candidate from a top-tier leadership spot in the party.

That reality has triggered calls for Golding to reassess the membership of the NEC as its disloyalty has already begun to rear its head in the wake of a sometimes bitter leadership campaign with Lisa Hanna that culminated earlier this month.

“This is not a loyal NEC. We have all sort a people who a oppose, oppose long time, and now that Mark in the big seat, him going to feel it worse. So if him don’t smell the coffee quick, him goose cook,” a long-time NEC member told The Gleaner outside the Karl Hendrickson Auditorium at Jamaica College, where the voting had taken place on Sunday.

At the end of the count, Paulwell gained the votes of 153 NEC members to defeat Brown Burke, who tallied 133.

The shutout of Brown Burke has sparked introspection about the role of women in the upper echelons of the party.

“That is something that the People’ National Party is going to have to think about. For a party that understands the role of women and reaching out to women, as a party, we are going to have look at the message we sent to women,” Brown Burke told The Gleaner when pressed about the observation.

“I think that it is unfortunate that all 14, 15 members of the leadership of the People’s National Party today is made of men,” she added, expressing confidence that Golding would rectify the issue.

Brown Burke said that she would not offer herself for the upcoming vice-presidential election.

“I have absolutely no intention of doing so,” she declared.

Brown Burke was the campaign director for Golding’s successful presidential bid and would have served as a strong ally.

But Paulwell, who campaigned against Golding in the presidential election, pledged to be loyal to the new leader.

Later, Paulwell told The Gleaner that he would be focusing on uniting the party and vowed to attract more women into the leadership of the party in his new role.

There was a bright spot for Golding in Sunday’s affairs, though.

Campbell amassed 147 votes to turn back the challenge of Raymond Pryce, the former deputy general secretary, who received 138 votes.

Overall, 336 people were eligible to vote but only 288 cast ballots.

Campbell told The Gleaner that he expected to be nominated as a commissioner of the Electoral Commission of Jamaica next month.

He further said that he expected that Wensworth Skeffery would remain as one of the PNP’s nominated commissioners.

Campbell, often criticised for his brash tongue and who was the hatchet man against Dr Peter Phillips in Peter Bunting’s failed presidential campaign in September 2019, said he would work to heal the party’s wounds. He rejected suggestions that he was a major contributor to the fissures that have opened up in the PNP.

“I am not a divisive person at all,” Campbell said.

“There is a lot of work that needs to be done to unite the party. We are not going to just gloss over it,” the newly elected general secretary said.

Campbell told The Gleaner that as general secretary, he would be making full strides to prepare for the local government elections that are now due no later than February 2022.

Having announced that he would be on a hiatus from representational politics, Campbell said he would be assessing the readiness of each division to ascertain which ones are winnable.

But even as both Campbell and Paulwell move to settle into their positions, in the aftermath of Sunday’s exercise, all eyes will be on Golding’s pick for the vacant Senate seat.

Golding is expected to select Bunting, the defeated Manchester Central candidate and long-time ally, to sit on the opposition benches in the Upper House.