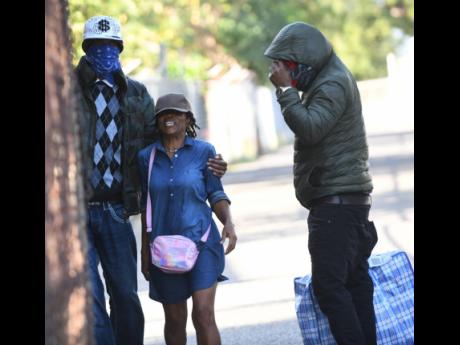 File
A deportee, with face covered, is met by a relative at Harman Barracks in Kingston in February. Dozens of Jamaicans are expected to arrive from Britain today.

The second batch of deported migrants from the United Kingdom (UK) for the year is due to arrive on a charter flight from London today amid a cacophony of objections to the flight.

Matters concerning the potential spread of the novel coronavirus in transit, according to one Gleaner source, are a major cause for concern for a number of groups that sought a cancellation.

Sources in London say the plane was expected to leave London at 1 a.m. GMT or 8 p.m. EST Tuesday.

Dr Christopher Tufton, the health and wellness minister, said those who arrive on the charter flight would be tested upon arrival and held until their results are known. They will then be expected to self-quarantine at home for the mandatory14-day period.

About 50 persons with criminal records, up to the time of writing Tuesday evening, were being bussed to the Stansted International Airport, 42 miles northeast of central London.

“The big worry, though, is COVID-19. I was told by a bloke on one of them buses en route to the airport that none of them has been tested for the virus,” a Gleaner source said.

“If that is the case, then it would be absolutely shocking that the Jamaican authorities would accept them just like that.”

Jamaica’s parliamentary Opposition has lodged its displeasure with the deportation and urged the Holness administration not to allow the aircraft landing rights.

The UK has recorded 1.6 million infections and 59,000 deaths amid a surge in coronavirus cases that has swept through Europe heading into winter. The Boris Johnson administration has imposed a national lockdown to staunch the rise in infections.

As at Tuesday, December 1, Jamaica had recorded 10,810 coronavirus cases and 258 deaths, with the authorities maintaining austere measures to limit the scale of a New Year spike after the Yuletide season.

One UK-based human-rights activist said that the Home Office’s mass deportation should not be allowed, particularly because blacks and other ethnic minorities have been found to be at greater risk of death from COVID-19 than other groups.

Last week, Home Secretary Priti Patel hit back at attempts by 82 black public figures to halt the deportation of the convicted Jamaicans, saying that she was “unapologetic” about removing people who posed a risk to the public.

According to a report in the Daily Telegraph, Patel said: “These dangerous foreign criminals have no place in our society, and I will not compromise the safety and security of the British people by letting them stay in our country.

The Home Office further disclosed that a number of individuals had already been removed from the manifest due to appeals by specialist legal firms while also noting that none of the individuals due to be on the flight were eligible for the Windrush Scheme.