A home for Christmas - With dwelling burnt to the core, hope flickers for triple amputee 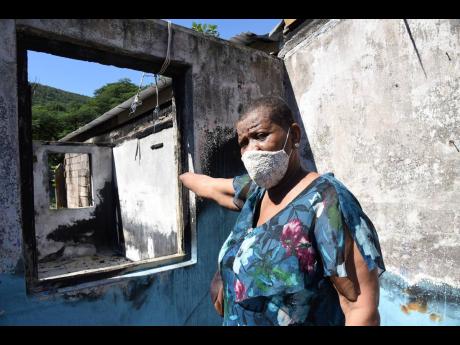 Ian Allen/Photographer
Miriam Lindsay gestures towards a room in her razed house in Hermitage on Sunday. 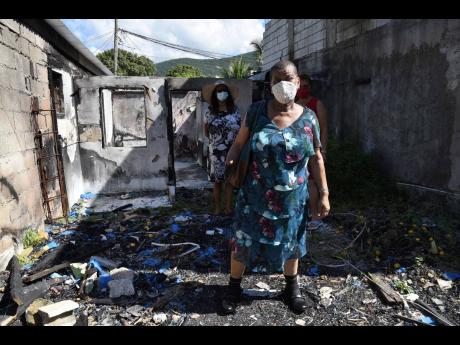 Ian Allen/Photographer
Miriam Lindsay, a triple amputee, stands what remains of her bedroom in the burnt-out shell of her home in Hermitage, near August Town, in St.Andrew. Lindsay lost everything in the fire and is now seeking help to rebuild.
1
2

Triple amputee Miriam Lindsay still has fond recollections of watching her favourite soap operas within the comfort of her home.

That’s now a distant memory after her two-bedroom house in Hermitage, St Andrew, was razed by fire in April, forcing her to depend on the charity of angels, as she calls congregants at the Christian Life Fellowship church who have stuck by her side and are rallying for aid to rebuild her home for Christmas.

Lindsay lost both legs to gangrene as a baby, and her lower right arm shortly after. Lindsay’s mother placed her in state care at Maxfield Park Children’s Home before she was adopted by a pastor.

The 65-year-old, who once resided at the Sir John Golding Rehabilitation Centre, cherishes her independence having saved to purchase her home.

However, the police killing of her son and April’s fire tragedy have piled on trauma that has brought her to the brink of suicidal thoughts.

But the love and charity of Lindsay’s friends at Christian Life Fellowship, located on the Gordon Town main road, have lifted her spirits amid the misfortune.

Lindsay remembers how she froze with fear as she heard her nephew bellow that the house was on fire.

But she emerged from that daze, attached her prostheses, and sprung to life to escape the burning building.

“Di door was already open and when mi look, the fire was coming straight in here. I wasn’t thinking, but when the heat hit, I moved fast, man,” she told The Gleaner, finding humour amid the tragedy.

“Not because I am disabled ... they teach us to handle ourselves.”

Lindsay’s church sisters put the estimated rehabilitation of the house at $1.5 million. More than $400,000 has been donated already with the help of the Rotary Club.

A GoFundMe account launched for her has already brought in more than US$500.

One of the key influencers in Lindsay’s life is Carol Madden, member of Christian Life Fellowship.

Madden was one of the first persons at the fire scene in support of Lindsay.

“We decided that we had to get Marie’s house back in shape,” said Madden, using Lindsay’s nickname.

“Through the help of Sarah Martin Newland, who knew Lindsay from she was a little girl and who was instrumental in getting her a house through the National Housing Trust.”

Church colleague Maxlyn Nobel told The Gleaner that when she heard of Lindsay’s plight, she felt compelled to take her in.

“I met her at church. She loves to go places, without hesitation. When I heard that her house was destroyed, my initial reaction was, ‘What?’ My response was to have her stay with me,” said Nobel.