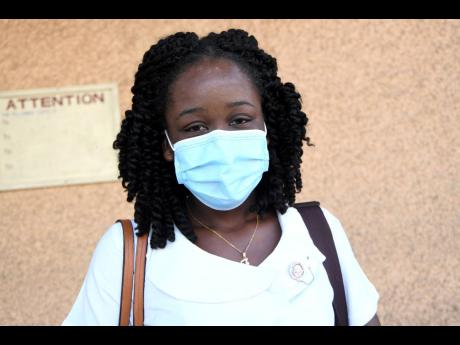 Rudolph Brown/Photographer
Jodi-Ann Bethune, nurse at KPH, has some reservations about the COVID-19 vaccine. 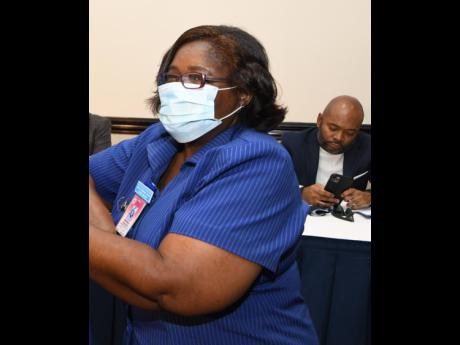 As the Holness administration fine-tunes plans for the roll-out of the coronavirus vaccine in April 2021, it is emerging that the Ministry of Health and Wellness might be facing anti-vaxxer pushback from front-line staff who are one of the key groups first to be inoculated.

Front-line staff might complicate what could be a logistical nightmare for the Government as doctors, nurses, porters, guards, and others in the hospital and health centre network interact with patients and present the greatest threat as transmitters or victims of viral outbreak.

The cool reception to the vaccine is not unique to Jamaica as suspicion and fear have been reported in developed countries that are much further ahead with the despatch of what could be a game-changer exactly one year after COVID-19 emerged in China.

Anecdotal reports from an unscientific canvass of porters, janitors, doctors, and nurses at the two major hospitals in Jamaica’s capital on Sunday indicated that the health ministry may have to concentrate a major awareness campaign within its own ranks before broadening it to the wider public.

Scepticism was rife among a variety of workers at The University Hospital of the West Indies (UHWI) and the Kingston Public Hospital (KPH) as the Government commences detailed plans on how it will engage the distribution of the COVID-19 vaccine Moderna.

Dr Gareth Fairclough of The UHWI has already made up his mind to take the vaccine. He took the position based on the fact that the vaccine has been passed by the World Health Organization (WHO) and the United States Food and Drug Administration (FDA).

“Some people complain of side effects, but everything has side effects. There is a side effect profile for every medication,” Fairclough told The Gleaner.

“Some people react differently, but it has been cleared to say that it works and can be distributed.”

But the thought of a vaccine was not so easily accepted among others.

One administrator at The UHWI, who wished to remain anonymous, said he didn’t trust the vaccine and wouldn’t take it for fear of undesirable side effects.

A nurse, who also requested anonymity, said she is “very wary” about taking it but said she had no qualms administering it once patients agreed. She was candid about why she had reservations.

“I know the validity of a vaccine and how important it can be to boosting immunity, but I need to know all the details and what are the contents of that vaccine,” she told The Gleaner.

At KPH, there were front-line healthcare workers who welcomed the vaccine, but others declared unwillingness.

Nurse Jodiann-Ann Bethune said she would be monitoring developments in the US and Europe before she takes the jab.

“I can’t just take it like that. I would have to know the effects it will take on my body. I am not sure if I will take it,” she said.

Failure to secure the buy-in of a critical mass of healthcare workers may be fatal to the vaccine project. The upshot: If those administering the jab doubt its usefulness or express fear, what then of non-medical personnel?

Carmen Brissett, first vice-president of the Nurses Association of Jamaica (NAJ), is aware that it will be an uphill task making disciples of the majority of nurses amid a global vaccine race that has had many as many misses as it has hits. The rush to have vaccines authorised may also be hurting confidence in their integrity.

Brissett says that there have been mixed feelings about the vaccination drive.

“Some nurses say they will take it, but others say they aren’t prepared to take it. Some will and some won’t, just like the flu vaccine.

New NAJ President Patsy Edwards Henry is pressing politicians to lead by example and say whether they are willing to be vaccinated, Brissett told The Gleaner.

Brissett said there should be a thorough investigation to ensure that there is no link between the vaccine and facial palsy – a condition that paralyses one side of the face.

“Every drug has some side effects. Just yesterday (Saturday), I was talking to someone [in my circle] who told me that four persons who have taken the vaccine already may have suffered facial palsy,” she added.

Many people tend to consider front-line workers to only be medical personnel, but security guards and porters are actually the first responders who interface with patients. Enlisting them as part of the first set of vaccine recipients may also be a tough ask.

Several guards at both KPH and The UHWI harboured distrust of the new vaccine.

“When it come to dem sumn deh, mi just listen. Mi naw tek it. You mustn’t take it either,” he said.

And a janitor said that she would submit to the jab if members of the government showed proof they had taken it.

Andrew Vineyard, a porter, said, however, that he was in agreement with the vaccination drive because COVID-19 “is very serious and is something weh can kill you”.

“The vaccine could help,” he said.

President of the Jamaica Medical Doctors Association, Dr Mindi Fitz-Henley, told The Gleaner on Sunday evening that she had been encouraging doctors to take the vaccine to ensure its effectiveness. As one of the members of the National COVID-19 Vaccination Commission, Fitz-Henley gave the assurance that no one would be forced to take the vaccine.

She said that the ministry has had one educational meeting so far among general practitioners.

“... It is voluntary and there will always have contraindications medically. As a way of protecting those more vulnerable persons, we do need a lot of persons to get the vaccine,” she said.