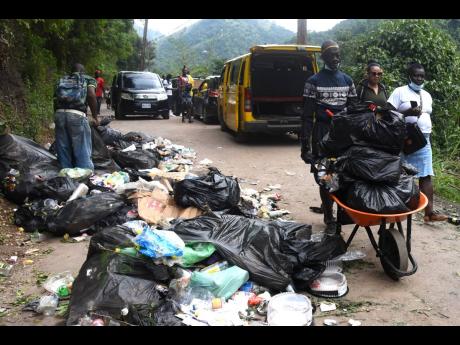 Kenyon Hemans/Photographer
A resident of Gordon Town in St Andrew pushes a wheelbarrow filled with waste to the other side of a breakaway so it can be collected by garbage trucks. A breakaway has prevented vehicular access to the community via the main route.

Since a major breakaway along the Gordon Town main road in rural St Andrew left a number of communities almost cut off, residents have been rallying to rid the area of waste and prevent a public health nightmare as the districts can no longer be accessed garbage trucks.

New of delays in the completion of an alternative route through Savage Pen, which was to be opened by the end of last year, mean that the arrangement will continue for a while longer.

With garbage piling up in Gordon Town weeks after the road was damaged due to landslides triggered by rains in November, residents got creative and pooled their resources to resolve this problem.

They arranged with the National Solid Waste Management Authority (NSWMA) for a truck to come to the pickup point behind the breakaway on Saturday mornings.

On the Friday nights before, the garbage – which is dumped in bins strategically placed throughout the community – is removed by cadre of youngsters and taken to the pickup point.

Patricia Grindley said this arrangement has worked for the benefit of the entire community.

“We realised that there were some unemployed young persons in the community, and so we decided to utilise their skills by organising for them to remove the garbage,” she told The Gleaner. “We asked residents to containerise their garbage properly and put them in the bins, which the youngsters clear on Friday. Community members have willingly made contributions to ensure that we can give them a stipend and keep this going so we avoid a build-up of garbage.”

The weekly process will continue, she explained, until NSWMA truck can access the community once more.

Grindley had high praises for the NSWMA, which she said has very supportive.

“The response from the NSWMA has been tremendous, in that we liaise with them and they provide us with gloves and bags on a weekly basis. They have been working closely with us,” she said.

She also had some suggestions for the residents to make the task easier.

“We would advise that they ensure that the garbage is properly containerised so that it can more easily be removed. We also ask them to try creative ways of utilising their waste such as using the waste from the kitchen to make a compost and to recycle. We do not ask them to burn because that is harmful to the environment and poses a threat to human and animal health,” Grindley said. “Also, if you are going out of the community to shop or whatever, the journey will take you past the garbage pickup point, so just take a bag with you and drop it off.”