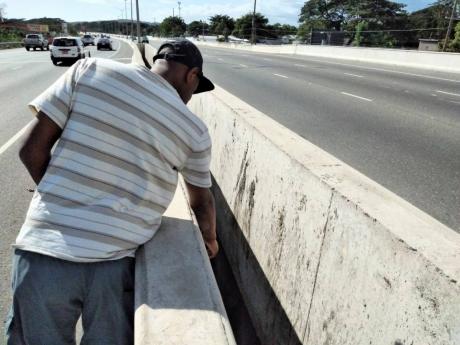 Photo by Jason Cross
Richard Goodall points to the opening he fell through along a section of the Mandela Highway in St Catherine, on the night of December 15, 2020. He sustained minor injuries in the incident. 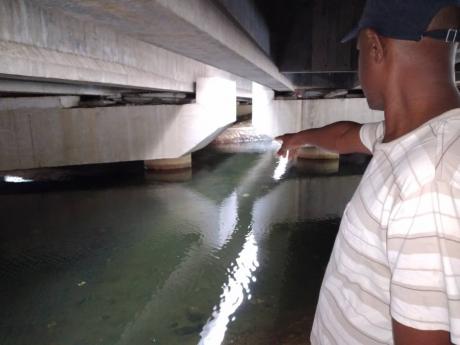 Photo by Jason Cross
Richard Goodall shows The Gleaner the dark, murky waters into which he fell.
1
2

After his motor vehicle suddenly shut down while travelling along the Mandela Highway three weeks ago, Richard Goodall was attempting to go over what he thought was a regular median in the vicinity of the Hydel Group of Schools in St Catherine when he suddenly fell through a gap and into sewage below, later learning it was a haven for crocodiles.

Hardly bearing visible wounds from the ordeal apart from scratches on the hand, lips and back, he told The Gleaner yesterday that he is still shaken up by the incident as he appealed to the authorities to cover the opening to prevent others from having the same experience.

Goodall said that about 8 p.m. on December 15, 2020, he was heading in the direction of Spanish Town when his motor vehicle suddenly stalled.

With the area poorly lit, he left the car where it stood and attempted to go to the other side of the road. Looking to the right for oncoming traffic, he approached what appeared to be an ordinary median and jumped over it and into dark, murky waters beneath the road.

Goodall said that when he realised the area was completely dark, he immediately panicked as he had no idea as to which direction he should swim to get to safety.

“In the water, it was very horrific, very terrifying. I was wondering if this was the way I was supposed to die. How did I fall here? With all those thoughts, I started to sink and I am a person who can swim, but I didn’t know where to swim because I couldn’t see anything in the water,” he told The Gleaner.

“Eventually, some light started coming through the creases and I swam towards the column. ... My left knee bounced in the column and I was able to stand,” he recalled. “While standing, I realised there was a road across from me, and I was beckoning to a lady who passed by, but vehicles were disturbing the sound.”

He said shortly after calling out to the woman, two men arrived shining flashlights and eventually guided him to safety, telling him he was lucky the crocodiles were not around.

“They asked me if I could swim and I said ‘yes’ and they helped me out,” he said.

Glad to have survived what he calls a “near-death experience”, Goodall wants the hole covered urgently.

“I wouldn’t want it to happen to anyone. I am glad to be alive. I thank the Almighty. If it was somebody who couldn’t swim, probably fear alone woulda kill dem.”