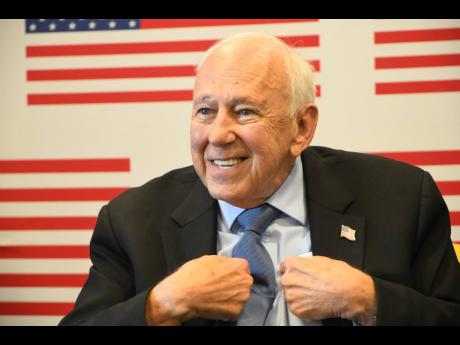 The Chinese Embassy has rejected remarks made by outgoing United States Ambassador Donald Tapia, accusing China of eavesdropping on his telephone conversations via a Jamaican domestic network.

In denouncing the US top diplomat’s comments, Xia Shaowu, chief of the political section, told The Gleaner that Tapia has been trying his best to muddy the relationship that his country has with Jamaica.

“A lie, even if repeated a thousand times, will not become the truth,” said Xia. “Without any evidence, Mr Tapia has been trying to pin the blame on and throw mud at China ... . Such practice is neither professional nor responsible and even ill-intended.”

He added that attempting to frame others with empty rhetoric can only undercut one’s own credibility as they “will end up being a laughing stock”.

“Habitual liars who badmouth others are often despised and shunned as unworthy companions,” he continued.

In an exit interview with The Gleaner last week, Tapia alleged that China was using local telecommunications company Digicel, which supposedly uses Huawei technology platforms, to listen in on his personal calls.

Digicel has said that “no Chinese equipment” has been deployed in its core voice and data networks, adding that none of the company’s vendors have access to customer data.

The embassy spokesman reiterated that China is a staunch defender of cyber security and stands against all forms of cyber attacks.

“We investigate and fight cyber attacks inside China or using China’s cyber infrastructure. This position is always consistent and clear,” Xia said.

“The achievements and competitive edge of Chinese companies in 5G are well-known. The United States should realise that it will not succeed in holding back Chinese high-tech companies or holding on to its monopoly in the sector through bullying and suppression.”

Further, he said that the best way to keep one’s lead is through constant self-improvement and not by blocking others’ development.

“As a saying goes, you don’t have to blow out someone else’s candle for your light to shine. Every country has the right to choose and partner with any member of the international community thereof, according to its interests, but these sovereign decisions mustn’t be used against third parties,” Xia stated.

He said that the almost half-century-long traditional friendship and cooperation cannot be shaken by any smear and that China will continue working with Jamaica to deepen and expand bilateral strategic partnerships, deliverable benefits to the two countries.

“Mr Tapia, this is a time for all of us across the world to come together, not go to war,” Xia said.