Going after gunrunners - Law against trading, manufacturing of weapons a top priority 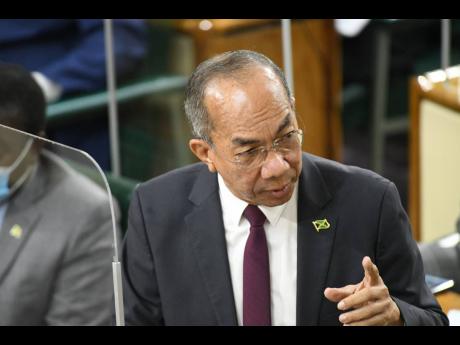 The smuggling of firearms, long considered the lifeblood of marauding criminal gangs, as well as the making of home-made guns and ammunition, is to become a criminal offence under Jamaican law.

The proposed new offences will be included in the revised Firearms Act, which the Government expects to unveil in the first quarter of the upcoming financial year, Minister of National Security Dr Horace Chang announced on Tuesday.

Though the trafficking of guns has long been a criminal offence in scores of countries, there is nothing in the current Firearms Act that deals with the trading and manufacturing of firearms and ammunition.

“Those are things that will be brought into the system. The smuggling, the trading, the manufacturing, modifications, and the paraphernalia that go with that,” Chang said during a virtual Gleaner Editors’ Forum.

In the last decade, Jamaica recorded more than 12,000 murders, close to 80 per cent of which involved the use of a gun.

The revised Firearms Act is among the legislative priorities of the Ministry of National Security for the 2021-22 financial year, which begins on April 1.

The Criminal Justice (Suppression of Criminal Organisations) Act, commonly referred to as the anti-gang law, the Alien Act and the Immigration Restriction (Commonwealth Citizens) Act, as well as the investigation and prosecution regulations that will govern the Major Organised Crime and Anti-Corruption Agency, are the other priorities, Chang revealed.

“We will get them out of the system,” the minister vowed.

“Getting legislation done is a tedious process and it is not totally under the control of the ministry, but I’m paying personal attention to it.”

But describing the overhauling of the Firearms Act as the number one priority, the national security minister indicated that the existing legislation, enacted in 1967, was introduced to “accommodate a legal framework for the Jamaica Rifle Association literally”.

“There was very little attention paid to illegitimate activity,” he acknowledged.

Just over four dozen guns, including high-powered assault rifles, and some 2,600 assorted rounds of ammunition have been seized at Jamaican ports in the last four years, believed to have been shipped to criminals by their cronies in the United States.

But that betrays a gaping deficit, as Chang estimates that 2,400 guns are trafficked into the country annually.

Chang acknowledged that because of the structure of Jamaican law, some persons held in connection with those gun shipments were turned over to American authorities to be prosecuted.

Among them is Jermaine Rhooms, a Jamaican believed to be residing illegally in the US state of Florida.

Rhooms pleaded guilty in 2019 to sending seven rifles, eight pistols, and approximately 3,011 assorted rounds of ammunition in a barrel that was intercepted at a warehouse in Jamaica on July 20, 2017.

He is now serving a 57-month prison sentence in the US.

Jamaican law enforcement authorities took the decision to repackage the weapons and send them to their counterparts in the US for Rhooms to be prosecuted there, sources told The Gleaner at the time.

“All now he would not be tried in Jamaica. And even if he was convicted, he would get, what? Four months?” one source suggested.

Justin Felice, a former senior cop in the United Kingdom who also served for several years as assistant commissioner of police in Jamaica, welcomed the move to criminalise the trafficking of guns, but cautioned that it was just one element of “a whole range of things” that needs to be implemented.

“Everybody thinks the panacea to solving a problem is to bring in a new law,” Felice said, questioning whether the legislation would stop the inflow of guns from Haiti, the US and Central America into Jamaica.