No green light yet on vaccine indemnity 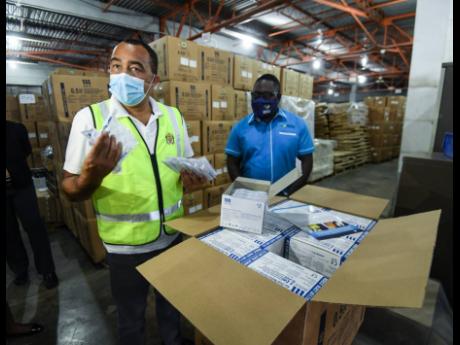 Jamaica has not yet ratified key documentation necessary for the fulfilment of its side of the bargain of the COVID-19 vaccine deal brokered with the COVAX Facility.

Documents reviewed by leaders at a CARICOM Intersessional Meeting on Wednesday and which were obtained by The Gleaner indicate that access to the Oxford/AstraZeneca is hinged to key country readiness requirements, including “national regulatory approval”, “import licence”, and “a signed indemnity and liability agreement”, according to Pan American Health Organization correspondence.

Health Minister Dr Christopher Tufton confirmed with The Gleaner on Wednesday that the indemnity critical for activating the deal with AstraZeneca had still not been fully affirmed.

Tufton, however, insisted that those regulatory matters would not delay the shipment of the vaccine to the island under the COVAX Facility.

Another document submitted by the Caribbean Public Health Agency revealed that Jamaica had requested 265,000 doses of AstraZeneca up to February 15 but has since asked for an additional million vials.

Jamaica has also sought nearly 107,000 doses of the Johnson and Johnson vaccine, which received the blessing of the United States Food and Drug Administration on Wednesday as being effective against the new coronavirus – with an efficacy of 86 per cent.

The health ministry is in a race against time to prepare the logistical infrastructure for the storage, security and delivery of the vaccine, though the late February or early March timeline might be further jeopardised by supply challenges of AstraZeneca. The drugmaker is behind in its delivery of 90 million doses to the European Union.

The National Health Fund (NHF) warehouse on Marcus Garvey Drive will be the central location for vaccine storage, while syringes and other equipment will be stockpiled at the ministry’s warehouse in Vineyard Town.

WATCH: We are ready, we can administer COVID vaccine - Tufton

“We are ready. We can administer the vaccine,” said Tufton after touring the facilities on Wednesday.

He said the NHF cold-storage facility is equipped to hold the first set of 600,000 doses of COVID vials for essential workers, but the ministry has maximum capacity for two million.

The NHF will be leasing additional refrigerated trucks to transport stock from the airport to central storage. The vaccines will be transported to different health departments for storage using igloos designed with ice pack slats to regulate the temperature.

“The dosages are very small, compact, so it doesn’t require a lot of space to transport quite a lot of dosages, so that is fine,” said Tufton.

“We could literally put it on a panel van with the ice pack and the igloo and preserve the temperature.”

The health ministry’s warehouse has 70 small igloos to be transported to different regions. So far, Clarendon is the only parish that has collected its supplies.

At least half a million syringes, along with COVID-19 immunisation cards to record the double dose, are being stored at the Vineyard Town facility.

Across the island, 550 healthcare personnel, primarily public-sector nurses, have been trained for vaccine management and administration to ensure efficiency at all stages of the process.

Each regional health authority is tasked with identifying locations where the vaccines will be initially offered and to create a rotating schedule.

Tufton said they would be vigilant with immunisation details using a particular appropriate seal and the signature of the administrator.

In the meantime, the ministry has ramped up security at the properties, including surveillance cameras.