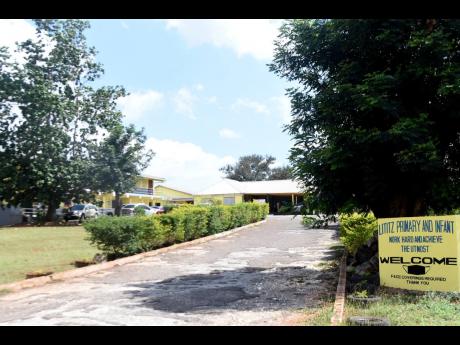 Kenyon Hemans/Photographer
The entrance to the Lititz Primary School in St Elizabeth. 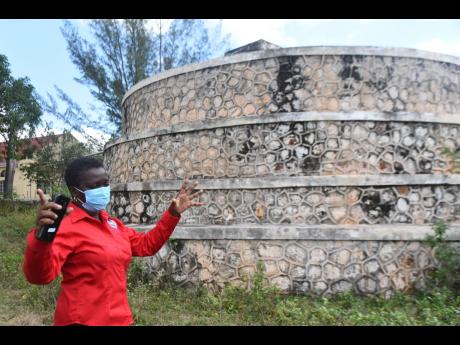 Kenyon Hemans/Photographer
Standing at the site of the original Rowe’s Corner school in Manchester, the Reverend Charmane Daley talks about the history of what has now morphed into the Lititz Primary School in St Elizabeth. 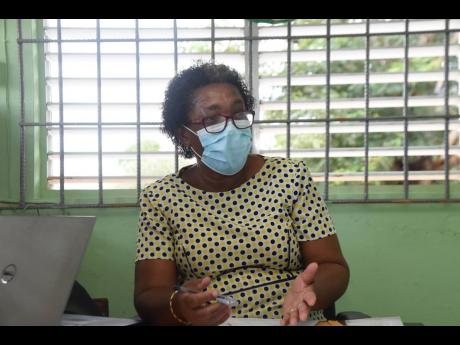 Kenyon Hemans/Photographer
Lititz Primary School Principal Karlene Reid-Foster says the school incorporates some of its history into the curriculum. 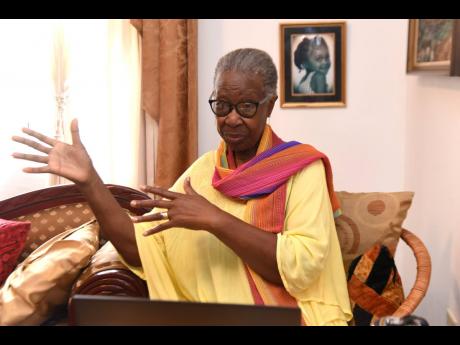 Kenyon Hemans/Photographer
Retired teacher and Moravian historian Lucinda Grace Peart telling The Sunday Gleaner about the early beginning of the Moravian Church in Jamaica and how it helped to educate slave children.
1
2
3
4

More than two centuries after the Moravians landed in Jamaica, a little girl named Lucinda Beverley (now known as Lucinda Grace Peart) was born. By age 12, she had conquered the highest levels of educational assessment in Jamaica for pupils, becoming a teacher at 14 years and two months.

Now months away from her 80th year, tall, stately and with graceful gait, she recounted how she blossomed from a seed planted in Germany from the lips of Anthony Ulrich, which landed on the fertile ears of Count Nikolaus von Zinzendorft.

It was the seminal plant out of which grew the beginning of a school in 1823 at Rowe’s Corner in Manchester, the site where the Moravian missionaries established the first school for the education of the children of slaves in Jamaica.

More than 30 years her junior, the Reverend Charmane Daley is only the ninth woman to be ordained a minister in the Moravian Church, an extraordinary feat first hurdled by Penelope Morgan. Daley is now minister at the Lititz Moravian Church, which was first established in 1838 and restored in 2007. It sits on a hill and surveys thousands of acreage once under Moravian ownership, but which now hosts modern housing stock, agricultural production and bauxite operations.

Proud, with slightly greying, low-cut hair, the slender woman with big eyes, dark skin and gentle persuasive voice described her own challenges in communities in the northern end of the parish as a minister. She was determined to grow like the seed planted by Ulrich.

“It has been a rough one. My first charge was in Langton, Lacovia Moravian churches, and at that time, the mentality of wanting a male minister was rife.

“They wanted a male – not a young female, and certainly not someone who does not wear hat to church. I didn’t fight it. I stayed there for 10 years, and they didn’t want me to leave,” she told The Sunday Gleaner.

She would move on to the Bethlehem Teachers’ College (now Bethlehem Moravian College), where she spent five years as chaplain before becoming minister at Lititz in St Elizabeth for eight.

Less than 100 metres from the church is the Lititz Primary and Infant School, the site where the Rowe’s Corner school was relocated to in 1826. The original wattle and daub structure is well preserved and provides classrooms for several grades. More than 200 students are on roll at the school, which currently conducts some face-to-face classes after satisfying the Government’s requirements to reopen amid the pandemic.

Curious eyes peered out as the Sun day Gleaner team pulled into the schoolyard last week. About 10 students were on the playground, yards apart from each other, having fun.

“You will find a Lititz in the UK, USA and wherever the Moravians have been. I wasn’t taught about Lititz, specifically. I am a Moravian. I went to Moravian College, and I would have learnt about the early Moravians and what they did. When I came here in 2015, there was no Moravian on staff. I tried to incorporate our history, even a little bit at a time at devotions,” said Principal Karlene Reid-Foster.

Grades three and four are taught culture and community studies as well as a bit of the church’s history.

Peart, Daley, Reid-Foster and Barnett are all connected to the seed planted by Ulrich. The mission to follow the Lamb (of God) is emblazoned in keeping with the church’s emblem “Vicit agnus noster, eum sequamur” (Our Lamb has conquered; let us follow Him).

“It all began with a black ex-slave named Anthony Ulrich from the Danish Virgin Islands. Von Zinzendorft, a very wealthy man, heard him talk about the abuse of black slaves in the West Indies. Ulrich told him it would be good if missionaries came to the West Indies to help the slaves, in spite of their shackles,” Peart began with flawless diction and composure.

Her mesmerising elocution continued as she tracked the history of the seed planted in the mind and heart of the baby born in 1700 in frigid Austrian ice, but fed food of resistance theology. That resistance found its way thousands of miles away to tropical and verdant Jamaica at Rowe’s Corner in Manchester (also called Somerset), which is soon to be declared a national heritage site.

Young von Zinzendorft was troubled by the harsh treatment of dissidents to Catholicism in Europe, leading many to flee to protestant areas of Germany. Raised by his grandmother, expectedly, he followed his father into government by age 21. A year later, he bought his grandmother’s estate and established a Christian community, and fate and faith brought him face to face with a Moravian named David, who became his first tenant. David was followed by 10 others, who founded a settlement on the Count’s lands and in 1726 the number increased to 300.

While visiting Copenhagen in 1731 for the coronation of King Christian VI, von Zinzendorft met Anthony Ulrich, who was described as a converted slave from the West Indies. Ulrich sought missionaries for the region because he wanted his brother and sister already there to be taught the gospel.

Johann Leonhard Dober and David Nitschmann immediately volunteered for the mission, with the backing of von Zinzendorft, and a year later, a potter and a carpenter headed to what is now St Thomas in the Virgin Islands. Their voyage to the region was not long, as one returned within weeks and the other after two years.

Others came, criss-crossing continents often in calamitous voyages to the New World with unfamiliar biting insects eagerly providing a guard of honour on arrival. Many died after arriving in Jamaica in 1754, in Black River.

Like the Spanish and English before them, they, too, captured thousands of acreage of Jamaica’s picturesque lands. But John Amos Comenius’ philosophy that humanity was all of one blood was the fulcrum of their desire to teach slaves to read, using the Bible. In 1804, formal pioneering work began at Fairfield, a property house bought and transformed into a chapel and schoolhouse.

But the hot, swampy conditions of Black River and the mosquitoes were merciless on their bodies. They fought back by building churches on hills where it was deemed cooler. Only Trinity Moravian in Kingston was not built on a hill.

Much of Lititz was used as a cattle farm, as well as Comma Pen, but Mandeville and Malvern grew coffee.

‘Search for knowledge must not stop’

Black people’s history is one of resistance.

“There was always resistance. Many people didn’t talk about that, but I didn’t know about it until I went to university. We were sorry for them, but we did not know that every day was a day of resistance. When I was teaching at Hampton and saw pictures of the girls in the 1950s, it was like apartheid in South Africa. So our young people need to know that a lot has been done to make the way easier for them,” Peart told The Sunday Gleaner.

Murders and suicides are dark parts of the history and women were raped to provide labour, and Peart recalled how the face of the aunt of a former Cabinet minister was powdered to cover her blackness, being the first dark-skinned student to attend the all-girls’ Hampton School, and who later became principal of Westwood High School and vice-principal at Bethlehem Teachers’ College.

Reverend Daley said the 1823 deed was in the bloodline of their theology.

“We are a caring church. In theological college, I have met with many others from different denominations, and hearing about us, they said if they left their denomination, they would join ours. We quarrel and fight, but we don’t leave. We go right back together. That’s who we are,” she said.

School history flourished when the minister was also the headmaster.

“This was the biggest Moravian primary school in Jamaica,” said Reid-Foster, who theorised that the children would have walked – or ran – several miles to get to Rowe’s Corner.

The race remains unfinished, and today’s generation is urged to fight just as hard as their ancestors did.

“I wouldn’t use a broad brush. There are many who are helping young people to be better. But at all times, you have resistance, and our politics does not help. The two-party system does not help and people worship politicians and do not understand that politicians just run their mouths. I don’t think they understand how their greed for power affects the minds and brains of our young people,” Peart said with the weight of her 79 years.

For Reverend Daley, “The search for knowledge must not stop. The history of the Moravian Church is testimony to that, but I fear the church is becoming too secularised, causing confusion as to what we are all about.”

She vowed to continue the fight to maintain standards and “teach and educate with love”.

“I make sure that the history and contribution of the Moravians are taught to the students. There are still miles to go,” said Principal Reid-Foster.

Lucinda Grace followed the Lamb with the baton she collected more than 70 years ago from the tree under the cellar, which was her school.

Along the route, the Reverend Charmane Daley began her leg, and with Reid-Foster, they are still on track, preparing others for their own race, shaping the lives of thousands at all levels of the education system.

The baton has not yet been handed off to the current young pupils, but they, too, must continue the run from Rowe’s Corner to still undefined destinations. Punctuated with hurdles, over hills and through valleys, many brilliant legs have been anchored, despite the odds.