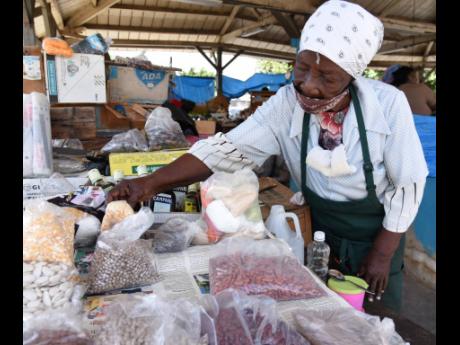 Ian Allen/Photographer
Market vendor Dorothy Marrah, who was born in the 1940s, says “back in those days, I wasn’t thinking about getting older”. 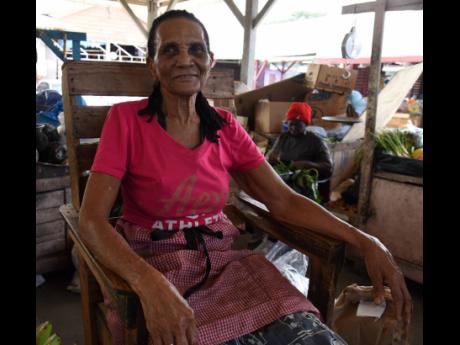 Ian Allen/Photographer
Annie Ivey, 78, has been selling in the Cross Roads Market for more than 20 years. Like thousands of women, she has no pension plan.
1
2

Kingston vendor Annie Ivey is just two years short of being 80 and has been working her entire life in different low-paying jobs but has never had a pension plan. She has no clue when she will retire. “Anytime mi cyah go nuh more. Mi nuh sick yah...

Kingston vendor Annie Ivey is just two years short of being 80 and has been working her entire life in different low-paying jobs but has never had a pension plan.

She has no clue when she will retire.

“Anytime mi cyah go nuh more. Mi nuh sick yah now, so me can work,” said Ivey, who has been vending in the Cross Roads Market for more than two decades.

Ivey is among thousands of older Jamaican women who are facing the risk of old-age poverty caused by a range of socio-economic factors, including the gender wage gap, the burden of unpaid care, fragmented work history, and part-time employment.

The septuagenarian laboured as a domestic worker in her earlier years and an employee under government-run crash programmes in the 1980s.

“Me used to sweep road every morning and me nah get no pension from that,” she lamented.

According to Ivey, after meeting her immediate needs, there was hardly any money left to put aside in the bank from her weekly earnings at the market. Added to that, she said banks are offering minuscule interest rates and their service charges are sky-high.

Her story is similar to that of Paulette Muir, a 65-year-old hairdresser, and Dorothy Marrah, a 1940s baby, who is also a vendor.

“Back in those days, I wasn’t thinking about getting older, and I didn’t know about NIS either,” Muir said of the National Insurance Scheme.

The NIS is a compulsory contributory-funded social-security scheme covering all employed persons in Jamaica. It offers some financial protection to the worker during retirement or a period of income loss, arising from injury on the job, sickness, or death of a breadwinner.

Muir shared that she has a little money in the bank and is currently the paid caregiver of her grandchildren.

Marrah, who still forms part of Jamaica’s working class, said that “when yuh have to paddle yuh own canoe, it’s rough.

“All that I have here selling is just the Lord bless me, even with good health,” she added.

Marrah sells honey, peas, spices, and castor oil, among other items, for subsistence. When asked how she plans to survive when she can no longer earn an income, she has one last resort: “God will make a way.”

Pension poverty and risk are not only confined to low-wage-earning women.

A retired pastry shop operator who opted not to be identified said she, too, has never had a pension plan but is hoping that her savings will carry her through the golden years.

A private pension is one of the most powerful poverty-reduction tools that Jamaica has at its disposal.

But the national private pension coverage currently stands at a mere 11.9 per cent of the employed labour force, according to the Private Pension Industry Quarterly Statistics published by the Financial Services Commission for the period ending September 2020.

In the meantime, the Pension Industry Association of Jamaica (PIAJ), a lobby for the industry, wants a more gender-based approach to tackling the stubborn problem of inadequate pension coverage - a significant contributor to poverty among the nation’s pensioners, including women.

According to PIAJ President Sanya Goffe, the concomitant challenges of inadequate pension coverage and old-age poverty cannot be tackled by legislative reform and public education alone.

“The unique barriers to retirement security faced by our women, such as disparity and the burden of unpaid care, among others, now need to be integrated into the current framework in order for national measures to have a greater impact,” Goffe said.

The pensions expert further pointed out that even in the absence of disaggregated gender data, anecdotal evidence indicates that women were being left behind far too often. On average, Jamaican women are paid 60 cents for every dollar earned by their male counterparts for similar work, according to the Global Gender Pay Report 2020.

This gap has significant consequences. For instance, this factor alone can extend the debt-repayment period for any loan that a woman undertakes, while reducing her ability to begin saving for retirement.

Goffe is urging women to be more proactive about joining a pension plan.

“Women are likely to live longer, yet you are likely to have ill-health consequences earlier than a male, so it is important to start those retirement savings as early as possible and so far as you are able to catch up when you experience a disruption in your pensionable services,” she said.

Goffe is also recommending that women move beyond the five per cent mandatory pension contribution and to instead pay the 20 per cent maximum.