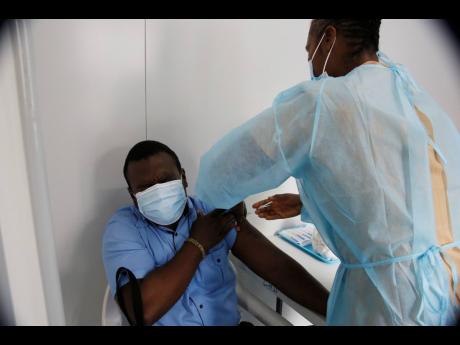 Nathaniel Stewart/Photographer
Chad Clarke, pharmacist at the May Pen Hospital, winces as he gets his first dose of the COVID-19 vaccine from a public health nurse on Wednesday. 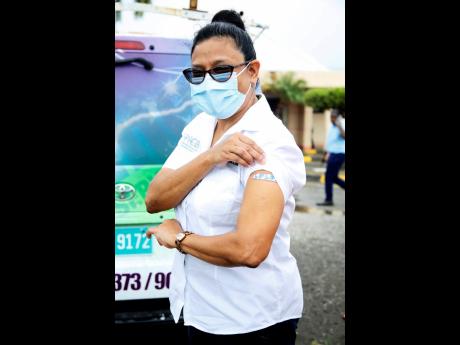 Young vaccine naysayers have been warned to learn at the feet of elders about the benefits of inoculation to Jamaica following devastating outbreaks in the 1980s that crippled the society.

That advice came from veteran broadcaster and communications expert Fae Ellington as the Government embarked on a campaign to win hearts and arms.

“Young bud don’t know storm! Allow us to convince you and tell you how the thing runs,” Ellington quipped, citing a Jamaican proverb about nestlings, during a Gleaner Editors’ Forum on Wednesday.

Her retort was directed at dancehall entertainer Patrick Gaynor – one half of the comedic Twin of Twins – who has reservations about subscribing to the COVID-19 vaccine.

Ellington, 67, said she was part of a generation that had seen how vaccination had blunted the dangers presented by poliomyelitis, rubella, and other diseases.

She urged the Ministry of Health and Wellness “to go grass roots” in an aggressive on-the-ground campaign to encourage Jamaicans to get inoculated.

Jamaica has targeted vaccinating 65 per cent of the nearly three million population by March 2022 – a crucial benchmark towards achieving herd immunity against the novel coronavirus.

Gaynor, who sings under the moniker ‘Curly Loxx’, remains sceptical of the vaccine, 50,000 doses of which were gifted to Jamaica by the Indian government.

“There are people who say you have to take the word of the people (scientists) who know; and this is true, but people have also seen these same minds and opinions change for the worst over the years ... and we have a problem right now with reputation,” argued Gaynor, citing health experiments like the 40-year Tuskegee symphilis studies that imperilled the lives of black Americans.

He fears a political agenda.

“Sometimes the motivation of the people who are in control changes. The people who do these things can have different intentions,” he charged.

That vein of vaccine hesitancy is a real foe with which the health ministry will have to grapple – and defeat – if Jamaica is to meet its 65 per cent target.

WILL NOT BE DETERRED

But portfolio minister Dr Christopher Tufton said he will not be deterred by vaccine deniers.

“We expect that there is going to be suspicion out of uncertainty and outright rejection of the vaccine. It’s all around us,” Tufton told the forum.

“Social media is very powerful and we have a lot of young influencers in the society.”

Dr Denise Eldemire-Shearer said she was befuddled by the doubters among Generations X-ers and Y-ers, many of whom bear the blotch of vaccination on the arms. Curly Loxx is one of them.

“I find that so difficult to understand because the young people of today are the ones that have had vaccines from they were born,” said the professor of public health and ageing, who was the second person to get the COVID-19 shot in Jamaica on Wednesday.

“ ... If anybody was to tell me about vaccines, it would be the older generation who would not have had a vaccination in the 1930s and 40s,” she added.

Kevin Morrison, a nurse at the St Ann’s Bay Hospital, said his colleagues have been hard-pressed coping with by the impact of the coronavirus on the health system. He is not so patient with naysayers.

“Instead of listening to the general population who say they won’t take it, make an informed decision, do some research for yourself,” he charged, adding that “majority of the people I’ve ask why they won’t take the vaccine can’t give a valid response”.