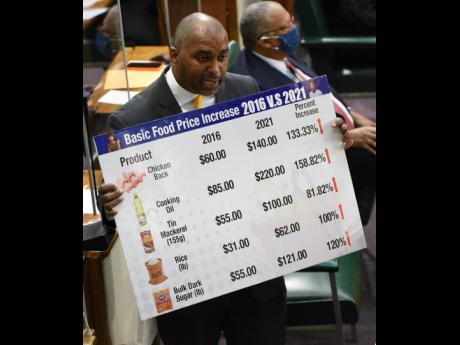 Ian Allen/Photographer
Opposition Spokesman on Finance Julian Robinson uses a chart to show movement in prices of basic food items between 20116 and 2021 – the period since the Jamaica Labour Party took over the reins of Government – during his contribution to the Budget Debate at Gordon House in Kingston yesterday.

Despite the Govern­ment’s proposed roll-out of its $60 billion SERVE Jamaica programme this fiscal year, the parliamentary Opposition says the administration’s budgetary allocation is insufficient to tackle the deepening economic and social fallout...

Despite the Govern­ment’s proposed roll-out of its $60 billion SERVE Jamaica programme this fiscal year, the parliamentary Opposition says the administration’s budgetary allocation is insufficient to tackle the deepening economic and social fallout from the COVID-19 pandemic.

As part of the SERVE Jamaica programme, the administration has pumped significant sums into acquiring COVID-19 vaccines and set aside funds for social and economic recovery.

Julian Robinson, opposition spokesman on finance, yesterday urged the Holness administration to increase expenditure by one per cent of gross domestic product (GDP) – or an additional $21.5 billion for the 2021-22 financial year.

“This would be funded by reducing our primary-surplus balance from the current projection of 6.1 per cent to 5.1 per cent,” said Robinson, adding that the move might require relaxation of the fiscal rules.

He said the relaxation of the fiscal rules would be justified given the economic impact that the pandemic has had on the country.

“Now is the time to be bold. It makes more sense to invest in our people now and reap the benefits,” Robinson declared while making his contribution to the Budget Debate.

In terms of a direct response to households and firms that have been heavily impacted by the pandemic, Robinson said that Jamaica spent 1.27 per cent of GDP responding to the crisis, while Barbados spent 7.9 per cent, Suriname six per cent, and the Organisation of Eastern Caribbean States spent between 3.8 and 11 per cent of GDP.

“When you look at the response of Jamaica vis-à-vis our comparable countries in the Caribbean, we are at the bottom,” he said.

He reasoned that the lessons that were coming out from country experiences with economic crises were that in order to grow, governments have to spend more.

The additional expenditures proposed by the Opposition include support to individuals and households amounting to $5 billion, with special allocation to female headed households.

Another $5 billion is recommended to provide support for the micro and small businesses, with loans and grants linked to business development and financial literacy.

Robinson also suggested a $3-billion allocation to support farmers as well as the implementation of small-scale irrigation systems.

The Opposition spokesman painted a stark picture of basic food prices rising at an average of 20 per cent annually in the last five years and expecting to spike further this year.

He said that since the onset of COVID-19 a year ago, many Jamaicans have been without a steady income. “People are having a hard time feeding themselves and their families. In addition to the problem of job losses is the problem of school closures, which has deprived many needy children of the meal they used to receive at school. Many, many, many people are hungry,” he said.

According to Robinson, a recent study by UNICEF Jamaica and the Caribbean Policy Research Institute showed that 45 per cent of households have had to cut back on food because they simply could not afford it.

“It doesn’t help our situation that since 2016, the cost of basic food items has skyrocketed. The cost of salt fish, cooking oil, chicken back and rice, for instance, have all increased over 100 per cent. Food poverty has [been] exacerbated,” Robinson stated.