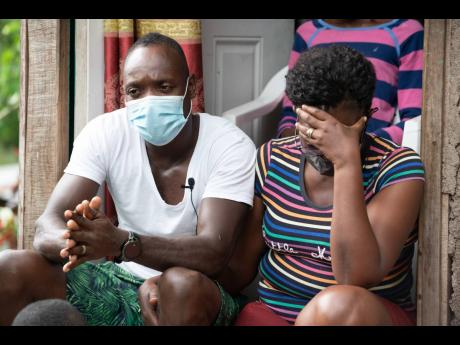 Gladstone Taylor/Multimedia Photo Editor
Iona Caine is grief-stricken about the death of her son, Otis Duncan, as her husband, Cameron Caine, talks to journalists on Sunday about the late JDF soldier. 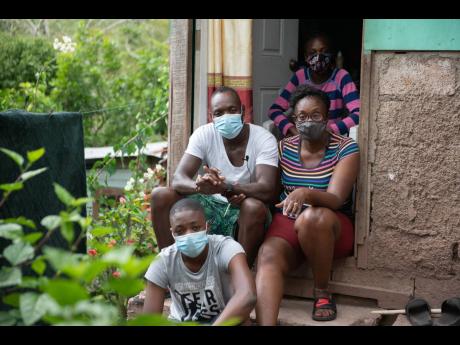 “Him never come home last night and him will never come home forever.” That was Iona Caine’s cry on Sunday as her eldest son, who was enlisted in the Jamaica Defence Force, died tragically at sea, plunging his family into mourning. Otis Duncan,...

That was Iona Caine’s cry on Sunday as her eldest son, who was enlisted in the Jamaica Defence Force, died tragically at sea, plunging his family into mourning.

Otis Duncan, 27, according to his mother, left his Arthur’s Rock district in the hills of east rural St Andrew for Portland with friends, where they had visited a beach.

According to reports, Duncan fell into difficulties at sea in the Hope Bay area.

But Caine told The Gleaner that the news was unbelievable to her because she had no idea her son had ended up in Portland.

Duncan had started a consignment side hustle, and she thought his plan was to deliver the liquor in Papine.

“He said, ‘You know my work, and I am not comfortable with strangers,’” Caine recalled of the conversation she had with her son on Saturday.

“I called his phone about after 5 p.m. because I notice he didn’t call me, and that’s when his friend told me. Everybody started to cry. I told the friend ‘it’s a lie’ because he told me he was not coming.

“The Coastguard boat came along, and they were doing some searches, but they didn’t come with a diver, so apparently, they did not get to go under to see if they could find him,” Caine told The Gleaner based on reports he had received.

Some time after 11 o’clock on Sunday morning, while JDF personnel paid the Caines a visit, it was telegraphed that Duncan’s body had been found.

“They were saying be hopeful, but I wasn’t hopeful. How could I be?” Mrs Caine told The Gleaner.

“Knowing that if the body is there overnight ... . It was hopeful and hopeless at the same time,” Cameron chimed in.

Duncan’s mother said that Otis’ younger brother, Shemar, blames himself as they try to come to grips with the loss.

“This is his brother. He is saying his brother (Duncan) told him to take up his book and him feel if him did tek up the book, him brother would stay with him and help him go through the book and [wouldn’t have gone] to the beach,” Mrs Caine said, glancing at a forlorn Shemar.

The Caines said the JDF has been very supportive of the family.

Duncan, according to his mother, enlisted in the JDF just over two years ago, fulfilling his childhood dream of becoming a solider.

Mrs Caine remembers him as “the life of the party”.

“If he walks into your life and don’t change your life, your life cannot be changed,” she said.