Poet Laureate Olive Senior to inspire love of the land 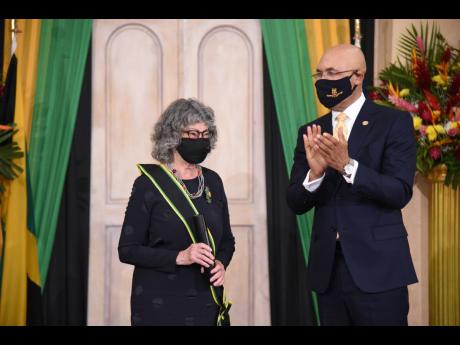 In a ceremony of investiture held at King’s House on Wednesday, Senior, 79, was bestowed with the national honour by Governor General Sir Patrick Allen.

A Poet Laureate is expected to stimulate a greater appreciation for Jamaican poetry, write poems for national occasions, preserve and disseminate the island’s cultural heritage through prose.

Senior, the seventh of 10 children, was born in 1941 and grew up in rural Jamaica.

“I tell everybody that at the age of four I decided I was going to be a writer or a creative artist of some kind. I just knew that,” read a snippet from an October 17, 2004 Gleaner publication.

Senior began writing while she was a student at Montego Bay High School and worked with the Gleaner during the holidays.

She read for a degree in print journalism at Carlton University in Ottawa, Canada, and on her return to Jamaica, she worked with The Gleaner until she left for the United Kingdom to pursue further studies in communication as a Thomson Scholar.

During her tenure, Senior intends to engage the nation in the reading and writing of poetry that speaks to the land.

“To use what is called ecopoetics to develop a lasting awareness, especially among youth, of the need for environmental protection, care, and ownership of Jamaica’s national resources. The urgency is great as fragile Caribbean islands are in the forefront of the destructive challenges posed by global warming,” she said on Wednesday.

Reflecting on her childhood, she said she was fortunate to have seen Jamaica in the full glory of the morning.

“I’d like to use my mandate as Poet Laureate to evoke in the young, especially, that sense of possession and being possessed by land and landscape which nurtured me as a child and which has propelled me to this momentous day in my life,” Senior remarked.

Senior also aspires to lift poetry beyond the page and into other media.

Her work has been widely taught in schools and universities with Gardening in the Tropics being a staple poetry textbook for the Caribbean Advanced Proficiency Examination syllabus.

In February, Senior published her 19th book, Pandemic Poems: First Wave, a collection of poems written and posted on her Twitter and Facebook pages between May and September 2020.

Each poem is a riff on a word or phrase trending at the particular time.

“What if you wanted to keep me at arm’s length anyway?” read an excerpt from ‘S for Social Distancing’.

In her remarks, Culture Minister Olivia Grange said that for generations, Senior has been a beacon of light for Jamaica through her “ever-expanding canon of acclaimed work”.

“As an academic, a poet, historian, and cultural activist, Ms Senior has etched her name, but more so, all our names and identities into the tapestry that is Jamaican cultural knowledge,” she said.

Grange, who presented Senior with a bouquet of red roses, said the poet has consistently delivered excellence through education, creativity, and an unwavering passion to give voice to the unspoken of Jamaica and the Caribbean.

· Institute of Jamaica Centenary Medal for Creative Writing in 1979;

· Norman Washington Manley Award for Excellence in the field of Preservation of Cultural Heritage in 2003;

· Musgrave Gold Medal from the Institute of Jamaica in 2005;

· Editor of two of the Caribbean’s leading journals – Social and Economic Studies at the University of the West Indies and Jamaica Journal, published by Institute of Jamaica Publications;