Cops warming up to COVID vaccine 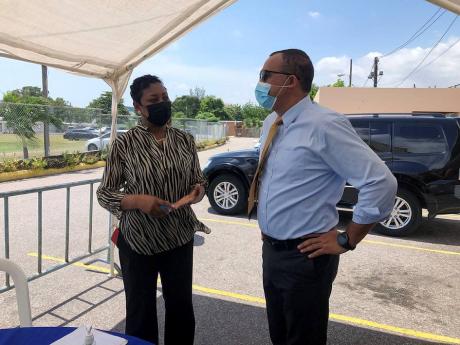 Health and Wellness Minister Dr Christopher Tufton has said that the alarm raised over a missing vial containing 10 doses of the AstraZeneca vaccine at the Cornwall Regional Hospital in Montego Bay, St James, could be overblown as it is just “one vial”.

Yesterday, he stressed that the investigation launched on Tuesday into the situation has not been completed.

“The vaccine plan assumes as a routine, not based on any call by anybody, auditing the process to ensure that we report on the usage of each dose, and so it is in that audit that that particular breach was picked up,” Tufton said, saying that critics were not pointing out that the system works.

The minister said that while he was not making excuses for the missing doses, the health team was making up ground and no one one would be turned away if they have been scheduled to be inoculated.

“It’s one vial - 10 doses. It is not a case with multiple vials and multiple doses,” Tufton told The Gleaner.

“In fact, we are actually getting more now from a vial than what was originally anticipated. We are now getting 11 and 12 doses. That doesn’t excuse the loss of the one vial, but the truth is, from a numbers perspective, we will still be in a position to meet those numbers we had originally stated in terms of the 50,000 and what it would do.”

The minister added that Jamaica was well within international benchmarking practices, which suggest that a five per cent loss under any immunisation programme is standard.

Yesterday, Tufton and Dr George Leveridge, director of the police’s Medical Services Branch, expressed satisfaction with the take-up rate of vaccines among officers of the Jamaica Constabulary Force (JCF) as they observed activities at the Police Officers’ Club in St Andrew.

“It’s important that Jamaica appreciate the important role of our security personnel, JDF (Jamaica Defence Force) and JCF. They are front-line workers. They are the ones in the fields every day and interact with the general public and interact with the public on the COVID response in terms of enforcing the rules of engagement, the quarantine, and so on,” Tufton said, a direct response to those questioning why the police and army were named among the priority groups.

The Gleaner was informed that initially, many cops had adopted a wait-and-see approach, but they have been buying into the programme.

“There is a groundswell of support in taking up the vaccine,” said Leveridge, pointing out that almost 1,000 cops have received their first jab.

“A number of persons have gone ahead and gotten themselves vaccinated at other sites, which are not designated sites. I understand that 50 persons were vaccinated at Bellevue yesterday, and then the day before, a few actually walked into St Joseph’s Hospital, and they offered them the vaccination.”