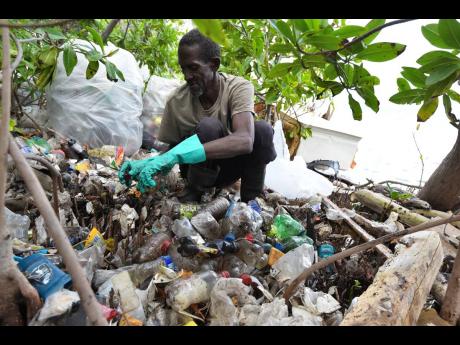 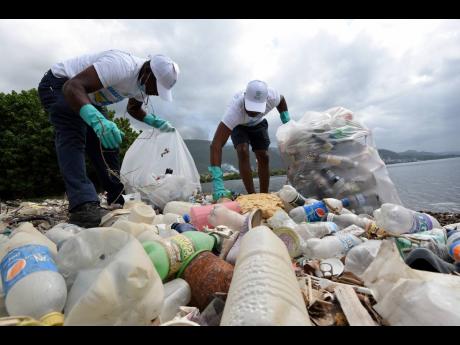 COVID-19 had a hand in Thursday’s commemoration of Global Recycling Day by Recycling Partners of Jamaica Limited, as many members of the public took the Government’s ‘tan a you yaad’ mandate to heart and opted not to turn out for the collection drives.

Recycled items were collected along the shoreline running from Sigarny Beach to Rae Town, and a mangrove island located about two kilometres from Port Royal.

However, the enthusiasm and hard work of Recycling Partners of Jamaica employees paid off. The company closed its Retirement Road office in Kingston to facilitate the participation of its staff who were assisted by volunteers and a team of fishers from Port Royal.

By midday, more than a 1,000 pounds of plastic bottles had been tabulated at Sirgany, with 1,000 pounds collected from Refuge Cay.

“We were short of persons today because of the whole COVID restriction, but we did have some achievements in terms of what we were able to collect,” marketing and public relations manager for Recycling Jamaica Limited, Candice Ming, told The Gleaner.

“We went into the mangroves over Port Royal and collected as much plastic as we could. We had intended to collect all garbage but we were short-handed, so we chose to focus on the plastic bottles. I’m really to see how close we got to our original target,” she added.

The mangrove venture proved to be quite an eye-opener for Ming, especially since the Recycling Jamaica team had started the clean-up from last Saturday.

“The amount of plastic we saw on the little mangrove island out in Port Royal was enough to scare me. We started cleaning there on Saturday and collected over 100 bags and we are still not finished.

“So we are going to have to look at a sustainable programme to keep that area free because whatever garbage goes into the (Kingston) Harbour, the majority of it ends up over there and we are interfering with nature, in a sense. A lot of the mangroves are affected by a pile-up of garbage in the form of plastics. And when you look at Sirgany which we clean up more than any other location in the country and we never get less than 1,000 pounds of plastic bottles, regardless of how often we clean it,” Ming said.

On average, about 22 empty bottles in which sodas and other drinks are bottled weigh a pound.

Despite the magnitude of the national problem of growing plastic-bottle littering, Recycling Jamaica remains undaunted.