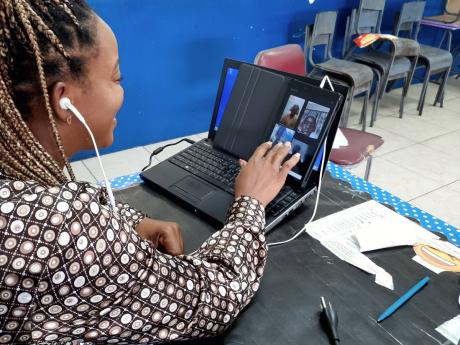 File
Camecia Vassell, grade six teacher at St Michael’s Primary, interacting with some of her students during an online class last October. 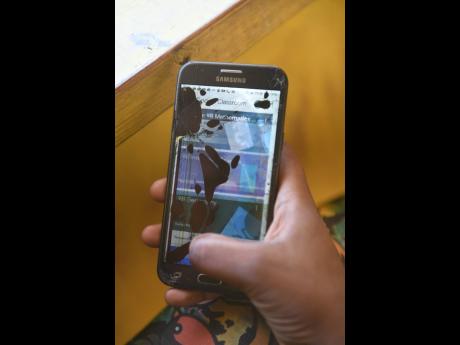 File
left: A 14-year-old student of Annotto Bay High in St Mary shows The Gleaner how she negotiates a cracked phone screen and bleeding ink to review her online lessons.
1
2

A number of schools are being forced to purchase expensive United States-dollar connectivity technology to maintain contact with students online as the island continues to deal with a high number of COVID-19 cases.

Administrators complained to The Gleaner that poor bandwidth prior to the pandemic has been worsened by the heavy online demand with the suspension of face-to-face classes.

Pleas for repairs to existing plans have fallen on deaf ears, for the most part, while expensive plans are being pitched as counter-offers.

Jamaica Association of Principals of Secondary Schools President Linvern Wright told The Gleaner that the problem largely lies with juniper switches, which allow for proper distribution of the Internet, which have gone bad.

He said that previously, the platform was good because it used fibre optic cables with very good speed. He said the switches in many schools have gone bad and “because of apparent issues between the Government and E-Learning, the claim is that the juniper switches are now outdated”.

Despite an appeal by the association to the education ministry to procure new switches, many schools have not had repairs or replacements on a claim that they are not available, the headmaster said.

“Most principals feel that an injustice is being carried out, because the same company that cannot repair the juniper switches, or take long to repair it, is the same one offering the high-price packages on the grounds that the juniper switches are outdated,” he argued.

“What is happening is that simultaneous with the schools’ request to get the switches changed or replaced agents from the same companies are calling schools to say we have these plans at over US$1,000 per month. They don’t even charge in Jamaican dollars. That is what is happening and we can show you the bills. And when you do add-ons, it is in hundreds of US dollars,” Wright told The Gleaner.

One leading boys’ school principal said that the institution was forking out US$2,000 per month on a plan which provides one-third of the megabytes needed by the school.

“I don’t understand how they come up with the costs they charge, but many of us believe that schools are being charged based on their old students’ associations. It’s unbelievable. A businessman said he was getting 100MB for the same price that my school was paying for 40MB. It is crazy,” said the principal.

Another headmaster said his monthly bill was US$1,000 while another was US$800.

“We had some of our switches changed. Our Internet infrastructure is unreliable. When E-Learning personnel come, they check their resources. No maintenance is done. The lab technician makes do how he can, but the bandwidth cannot carry the school population,” a principal told The Gleaner.

“We are still awaiting repairs to our E-Learning Internet connection. It has been out for a long time. We get Internet from a private service provider, but the service is poor. It is, however, our best available option. We pay in Jamaican dollars,” one principal said.

Wright said many schools did not invest in technology for one reason or another.

“Schools that invested and have the tech-savvy teachers are way ahead of others, and it does not matter how technologically savvy the teachers are, if you don’t have the technology to accommodate their skills, it adds to nothing. Many teachers are frustrated because they have the talent but not the tools,” he said.

Now, the upgrades are burning their revenues.

“The companies are charging an arm and a leg for the bandwidth the schools need. And what the Government ought to do is to have these people understand that if education is important, there needs to be some kind of affordable rates charged. There has to be a balance between profit and the need to educate our children,” Wright argued.

Government provides a grant to schools under the E-Learning programme.