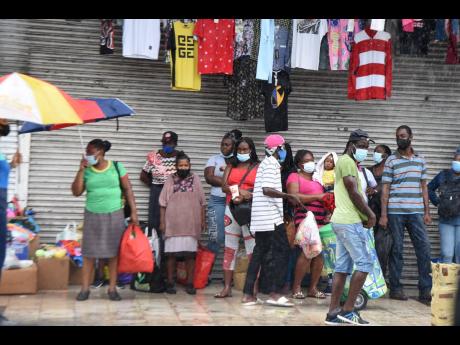 Kenyon Hemans/Photographer
Persons shelter from the rain along Orange Street in Kingston on Thursday. Shoppers crammed the capital's streets to make last-minute purchases ahead of the second consecutive weekend lockdown.

Warnings of the possibility of a post-Easter spike in coronavirus cases have drawn criticism from a respected member of the business community who has questioned the viability of the strategy if a surge of...

Warnings of the possibility of a post-Easter spike in coronavirus cases have drawn criticism from a respected member of the business community who has questioned the viability of the strategy if a surge of infections could arise.

Dennis Chung, a former CEO of the Private Sector Organisation of Jamaica, is irked by the admission by Chief Medical Officer Dr Jacquiline Bisasor-McKenzie on Thursday that while COVID-19 infections and hospitalisations had begun to plateau, the case count might rise after the holidays.

The Government has imposed three consecutive weekend lockdowns from March 26 to April 12 to rein in the galloping rate of COVID-19 infections since early February. The positivity rate has topped 42 per cent during that period, with multiple records in hospitalisations, and daily deaths and transmission. Overall infections are near 40,000 and deaths are closing in on 600.

“Right now in this long holiday weekend, we are at a considerable risk of increased exposure, if the number of persons on the road and in the shopping areas [and] in the recreation areas increase. We face the risk that this could be a triggering weekend with the result that in another two to four weeks, we would see our numbers going up,” Bisasor-McKenzie said during a virtual press conference on Thursday.

“This weekend could be a turning point for us in the wrong direction if it is that we have a large number of exposures going over this Thursday going up until Monday next week,” she stressed.

Chung, a chartered accountant, said that lockdowns cannot be both the solution and the problem.

“That doesn’t make any sense; that is just totally illogical. You are doing a lockdown in order to prevent any cases from coming up or to reduce it, but at the same time, you are saying that there might be a surge,” Chung told The Gleaner Thursday evening.

Chung has consistently questioned the wisdom of the curfew strategy, arguing that the country sacrificed billions of dollars in revenues and incalculable social displacement since the first lockdowns were imposed a year ago.

The upshot of the financial carnage has been huge: tourism is in tatters; and more than 135,000 jobs were lost, although some of those were reclaimed.

STATIN reported on Tuesday that the Jamaican economy declined by 8.3 per cent in the fourth quarter of 2020 when compared to the corresponding period of 2019, with hotels and restaurants tanking by more than 54 per cent.

Lockdowns were widely used globally in the infancy of the pandemic but their use has been discouraged by world health authorities. Some countries still impose lockdowns as a last resort to curb outbreaks.

“We in the World Health Organization do not advocate lockdowns as the primary means of control of this virus,” Dr David Nabarro, special envoy on COVID-19 for WHO, said in October 2020.

“The only time we believe a lockdown is justified is to buy you time to reorganise, regroup, rebalance your resources, protect your health workers who are exhausted, but by and large, we’d rather not do it,” said Nabarro.

Chung believes the Government is in a catch-22.

“What should be implied from that is that it may surge because people are at home spreading it, because there is nowhere else for people to spread it,” he said.

“If it is the shopping on Thursday that would cause it, it means that their strategy is wrong, because what it means then is that the strategy of having people cram in shopping hours, which is what people were saying. It basically neutralises the lockdown on the weekend,” Chung argued.

Opposition Spokesman on Health Dr Morais Guy has also suggested that the weekend lockdowns would not be successful. He described the measures as counterproductive.

“The number of COVID-19 cases will not decrease. We will not see any decrease in the numbers as a result of these measures in one to three weeks,” he said at a March 24 press conference.

Pressure has been mounting for Jamaica House to rein in the crisis amid widespread flouting of coronavirus safety protocols.

The Government pushed through passage of a new Disaster Risk Management Act with sanctions ranging up to $500,000 for breaches. There was contention, though, that the prime minister could make some offences draw criminal sanctions without parliamentary restraint.

In December, Bisasor-McKenzie and other health officials had warned that the country could see a spike in COVID-19 cases because of holiday travels and increased activities during Christmas. The numbers started trending upwards in January despite the implementation of curfews during the festive season. The country has generally witnessed a spike in the numbers after the holidays.

“In August last year, we had a triggering activity in terms of the holiday week and the events that followed and this resulted in a spike in the number of cases,” said Bisasor-McKenzie at Thursday's press conference.