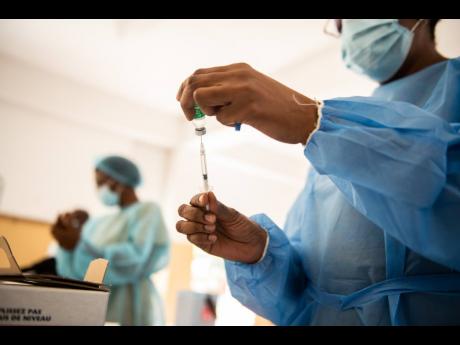 Gladstone Taylor/Multimedia Photo Editor
A public health nurse prepares a dose of the Oxford-AstraZeneca vaccine for the inoculation of a senior citizen at The Golden Age Home in Kingston on March 23.

Jamaica’s chief state agency tasked with the procurement of COVID-19 vaccines has been bombarded by fraudsters seeking to cash in on the global hunger for the jab. The revelation by Howard Mitchell, chairman of the National Health Fund, is a stark...

Jamaica’s chief state agency tasked with the procurement of COVID-19 vaccines has been bombarded by fraudsters seeking to cash in on the global hunger for the jab.

The revelation by Howard Mitchell, chairman of the National Health Fund, is a stark sign of the influence of speculators who have seized on a worldwide shortage of shots to stave off a disease that has infected 133 million and killed almost three million.

Seeking to tap interest in a starved market, vaccine scammers have targeted China, the United States, and other countries.

Mitchell, who is a former president of the Private Sector Organisation of Jamaica, said that some of these individuals are Jamaicans with international contacts.

“You have individuals who come from out of nowhere and say that we can get you vaccine. We will listen to them, but we will do our due diligence on them, and some of them are Jamaicans and some are not,” he said.

Mitchell said that the NHF has been filtering out “those trying a thing”.

“Everybody thinks they see a pot of gold, but we have a responsibility to the country,” Mitchell said.

Anxiety has heightened locally over vaccine hoarding by wealthy countries, which has hamstrung the efforts of developing countries like Jamaica to inoculate their populations.

Jamaica has immunised around 44,000 persons against COVID-19 since its inoculation drive commenced on March 10.

The vaccines were initially scheduled to reach late last week.

Mitchell said that crossborder transport involved a range of logistical hoops in moving the vaccines from South Africa to Ghana, where they would be packaged in specially refrigerated boxes. The stock was slated to be routed to Tenerife in the Canary Islands, then Bermuda, before finally reaching Jamaica.

“For each of those locations, you have to secure a permit for the aircraft. You have to get a waiver, which is a requirement for the vaccines,” Mitchell told The Gleaner.

“... You have to have all your documents in order in three different languages, and then on top of that, you have to make sure your flight crew does not run over their hours in terms of flying.”

Given global scarcity and the volatility of supply of COVID-19 vaccines, the Government is depending on the vaccines from the AMSP, as well as 20,000 doses of Moderna from commercial sources. An additional 26,000 doses of AstraZeneca are also expected under the COVAX Facility by May.

Mitchell acknowledged that securing vaccines has been challenging.

There have also been several attempts at fraudulent transactions by those hoping to cash in on the increasing global demand for vaccines.

Meanwhile, secretary general for Amnesty International, Agnès Callamard, said that the pandemic has amplified selfishness among the world’s political leaders. His sentiments were outlined in the Annual Report (2020-21) launched by the human rights body on Wednesday.

“The richest countries have effected a near-monopoly of the world’s supply of vaccines, leaving countries with the fewest resources to face the worst health and human rights outcomes and thus the longest-lasting economic and social disruption,” he lamented.

The human-rights expert said that 2020 revealed the weakness of international cooperation, which has acquiesced to the most powerful, while providing feebly for the weakest.

He called upon those in authority to immediately work to accelerate the production and delivery of vaccines for the benefit of all.

Amnesty International said that the pandemic and its allied containment measures have aggravated existing patterns of abuses and inequalities. This includes the introduction of online-only education without enabling access to appropriate technology.

“Lockdowns and curfews led to particularly high numbers of workers in the informal economy losing their incomes without recourse to adequate social protection. Since they dominated the sector, women and girls were disproportionately affected,” the group said.