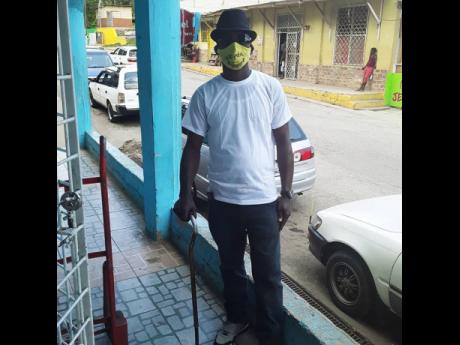 Contributed
Derrick Pryce said he felt foreboding uncertainty in the first 10 minutes of the journey that ended in a fatal crash on Highway 2000 on Monday. He is now recovering in Balaclava.

That’s the sense that gnawed away at the mind of Derrick Pryce as he travelled from Balaclava to Kingston on a Toyota Hiace minibus on the fateful Monday morning that climaxed with a deadly crash that claimed five lives.

Pryce, father of two, had serendipitously left behind one of his sons whose bags were packed and ready to accompany him. But for some reason, he decided to postpone his son’s trip to Kingston for the following day.

The 45-year-old survivor, whose body still aches from the bangs he sustained in the crash, is haunted by memories of the carnage along the P.J. Patterson leg of Highway 2000 that saw bodies strewn along the asphalt.

Up to press time Thursday night, three people were still hospitalised, including the driver, Dwayne Fowler, who is reportedly in critical condition.

Speaking from his St Elizabeth home, where he has been recovering since being discharged from the Spanish Town Hospital on Tuesday, Pryce recalled how the impact of the April 12 crash propelled an infant from a mother’s embrace into his lap.

He has corroborated the account of Sherka Carter that there were strange noises coming from the bus. The Balaclava resident said he was spooked by noise at the vehicle’s rear from as early as 10 minutes into the trip.

“He just wasn’t paying any attention to what we were saying. He totally disregarded us, and by now, we were on the highway, heading to Kingston at top speed,” he said.

“I knew that we were in trouble, so I started talking to God to keep us safe. I was very concerned about the lady with the baby. All along the baby kept looking at me with a smile, but I could see that the mother was uncomfortable,” said Pryce.

After the driver lost control and struck a truck, it overturned several times before perching on a median.

“After it came to a stop, the screams and shouts got louder, with persons who were trapped inside trying to get out. The baby was briefly in my lap, while the mother, who seemed to be unhurt except for some bruises, was panicking but was able to now hold the baby,” he said.

Pryce said he quickly jumped out of the window and rescued the infant and mother from the wreck. He said that he then helped four or five others from the vehicle, including “a heavy-set lady who was bleeding badly”.

“I strongly believed I was doing God’s work and He was protecting me because I watched the accident happen, and I didn’t panic one bit because the minute we started out, I had this strange feeling that something would happen, but I would be around to help some people,” Pryce, a self-professed man of faith, declared.