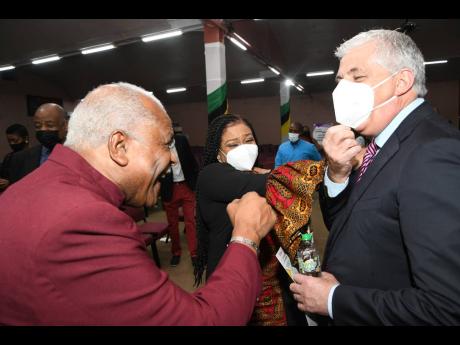 St Catherine North West Member of Parliament Hugh Graham will be pushing the parliamentary Opposition People’s National Party (PNP) to retable the censure motion against George Wright, the government MP who is at the centre of an assault saga that...

St Catherine North West Member of Parliament Hugh Graham will be pushing the parliamentary Opposition People’s National Party (PNP) to retable the censure motion against George Wright, the government MP who is at the centre of an assault saga that sparked national outrage last week.

Wright was implicated as a person of interest in a viral video capturing the beating of a woman.

But that investigation foundered when the police reported last Friday that neither Wright nor Tannisha Singh, who had both made initial reports to stations, cooperated with investigators.

The identities of the subjects of the video were also inconclusive.

Graham charged on Sunday that male parliamentarians have not done enough to protect women.

“Jamaica seems to be this violent place and violence against women is even worse. As parliamentarians in the highest seat of the country, we need to push ourselves to be better people and better men, and we need to do better,” said Graham, who represented Leader of the Opposition Mark Golding at a 20th anniversary church service for telecommunications giant Digicel at Fellowship Tabernacle in Kingston.

Meanwhile, the Rev Al Miller, pastor of Fellowship Tabernacle, said that while the graphic incident depicted on the video was disturbing, it was not an outlier in a landscape where violence was a scourge, including in domestic scenarios.

“I wouldn’t say it (violence against women) is on the increase because it has been a problem in our nation for years, at all levels of the society, not only where women are being beaten, but it’s also the way they are being raped, the way they are being molested. Also, it extends to where they are unfairly and unjustly treated in the workplace,” Miller told The Gleaner.

He urged society to rally to the defence of vulnerable women and argued that legislation has not been sufficient to protect them from violent partners.

“It also has to go beyond legislation because you can’t legislate to solve all of the issues. A lot of it has to go back to the values of people, and this is why it is important we must be teaching our men what is to be men,” the clergyman said.

Citing caution because the evidence has been inconclusive, Miller declined to pronounce on the ruling JLP’s attempts to isolate Wright, designating him an independent MP and saying he would be excluded from the party’s parliamentary caucus. But it is unclear whether the tag of ‘independent’ was properly grounded because Wright won the Westmoreland Central seat on a JLP ticket, and it is uncertain whether he has resigned from the party.

However, the clergyman urged parliamentarians not to seek to score political points off the issue of domestic violence.

“We must not simply be trying to throw stones at each other. This is an issue where, if you not careful, some of those men who speak against it are guilty of doing the same thing,” said Miller.