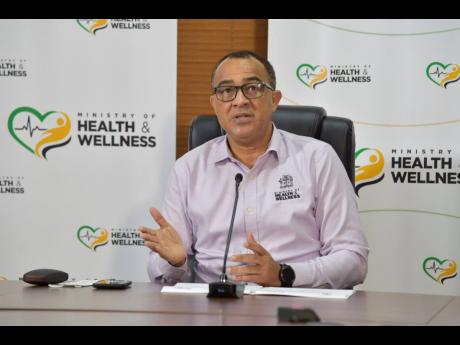 File
Minister of Health and Wellnes Dr Christopher Tufton has raised alarm about the threat of e-cigarettes.

Health and Wellness Minister Dr Christopher on Thursday turned the spotlight on the use of electronic cigarettes (e-cigarettes) by students, and vowed that lawmakers would ensure that the new tobacco-control legislation include provisions to deter its use among youngsters.

In a submission to a joint select committee considering the Tobacco Control Act, 2020, executive director of the Heart Foundation of Jamaica (HFJ), Deborah Chen, told committee members that electronic nicotine and non-nicotine devices have been shown to be harmful to health.

She said that e-cigarette use by the youth presents serious concerns as the use of nicotine in any form was unsafe, caused addiction and could harm adolescent brain development.

Data from the Global Youth Tobacco Survey of 2017 showed that 11.7 per cent of students used e-cigarettes.

The health and wellness minister told his colleague lawmakers that he was particularly concerned about the use of e-cigarettes by adolescents.

He said that the e-cigarette devices that come in different shapes and forms could be easily concealed and enter schools.

Tufton bemoaned the fact that an e-cigarette advertisement was positioned across from a prominent Corporate Area high school.

“Every time a child enters or exits that gate, they see this ad literally across the road from the institution, and I think we have a responsibility as a community and as Government to do something about that,” he said.

The health minister said that evidence had emerged that not all e-cigarettes were made from the same products, noting that some could be more dangerous than others, because of their chemical make-up.

He made it clear that the current tobacco legislation that was being reviewed by lawmakers should have provisions to protect youngsters from the harmful effects of e-cigarettes.

“It’s an area that nothing has been done and it is very important that this piece of legislation captures the risk and articulates a position that protects particularly our young people, but at a very minimum provides information to consumers so that they are fully aware of what choices they make,” the health minister said.

Tufton divulged that he had received calls and emails from parents who have raised serious concern about the use of e-cigarettes among schoolchildren.

Longmore said that teenagers were especially targeted for use of e-cigarettes “because it looks cool and it is the new way, the tech-driven way, but it is significantly deleterious to a teenager’s health” and predisposes them to addictions.

She urged the Government to place emphasis on a public education programme targeting young people and the negative effects of using e-cigarettes.

The government senator also wants the graphic warnings on tobacco products to be also applied to e-cigarettes.

Consultant in the health and wellness ministry, Albert Edwards, said that the legislation focused on tobacco and nicotine devices and products.

However, some committee members argued that the legislation could provide a loophole for some e-cigarettes as they might not contain nicotine but other harmful chemicals.

The bill imposes a ban on advertising and promotional tobacco and nicotine products.