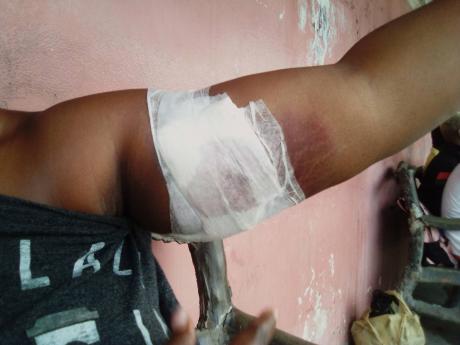 The pain was palpable for Dennis Carter as he mourned the loss of his beloved daughter. Incapacitated by a stroke earlier this year, Carter, who worked as a newspaper vendor, said it would have been better if they had killed him and spared his...

The pain was palpable for Dennis Carter as he mourned the loss of his beloved daughter.

Incapacitated by a stroke earlier this year, Carter, who worked as a newspaper vendor, said it would have been better if they had killed him and spared his daughter.

Carter’s daughter was one of two women who were killed during a brazen gun attack Thursday evening as they left the Meadowrest Memorial Park. Five other occupants of the bus, including a two-year-old child, received gunshot wounds.

The grieving father told The Gleaner that his family could be the target of future attacks.

“A she a look after mi, dem kill mi daughter and run go hide and dem sey dem a badman. She a mi life, now she gone left her three-year-old daughter, mi have two sons but a she normally do everything, clean, cook, and wash mi clothes. Mi nuh know how mi a go manage,” Carter declared between sobs.

He said his daughter was not involved in any dispute with anyone. “She nah carry no grudge fi nobody, she nuh malice nobody, she and nobody nuh in a no war or nothing and yet dem give her seven shots, so we could be next,” Carter, who could hardly control his emotions, stated.

Onieka Carter had attended the funeral of her childhood friend Troy Terrelonge, otherwise called Weed Seed, who was killed on the January 28 in a driveby along East Queen Street in Kingston.

The deceased woman’s father, while stopping short of revealing certain information about a long-standing rift that has been triggering ongoing violence in sections of central Kingston, said it was after the incident he heard that plans had been concocted to shoot up the funeral.

“A since she dead mi hear sey them was planning to shoot up the funeral. It a come from far… there is certain things mi can’t tell, but Father know, Him sit high and look down, mi know mi a go get justice from God. Mi wouldn’t let her go if mi was home,” the weeping Carter disclosed, at the same time pointing out that she was in a very bad spot because she was told that if she didn’t go to the funeral, they would be upset with her.

He continued, “Coco is a nice, loving, jovial person. All when she nuh know yuh, she reach out to yuh. Word out there is that the bwoy wey kill her, used to get things from her all di while. Mi wonder if Father God nah go mek her killer dem come to justice.”

And while the reality of the tragedy seemed to have dawned on the elder Carter, the tension in his community was at fever pitch when The Gleaner visited the area on Friday.

Residents were obviously shaken by the killing and the regular buzz in the community was replaced with an eerie silence with most residents staying indoors.

Tamika Johnson, who sustained injuries when a bullet pierced her left arm and lodged in her two-year-old son who was on the bus with her, was emphatic that she would not be going back to the community to live.

Disclosing that the infant who was transferred to a Corporate Area hospital was doing well after undergoing surgery, Johnson said she didn’t expect that they would attack the bus with only women on board.

“I only went because I heard that we were going to be protected by the police. Everything happened so suddenly. We stopped to buy refreshment just as we left the cemetery and as we moved off, I saw three men with guns come from out of the bushes and start shooting at the bus.”

Johnson said she bent over to protect her son and her young daughter who was also with her when she felt the shot ripped through her arm and hit her two-year-old in the belly.

“I bend over him until the shooting stopped and then I jumped through the bus window to seek help to get to the hospital,” she noted, adding that she felt there would have been reprisals.

Meanwhile. her 17-year-old son Shakeff Campbell, a student at Ardenne High School who was also on the bus, was shot in his right buttock. He was discharged from the Spanish Hospital yesterday.

He told The Gleaner that persons considered unfriendly were enquiring about the funeral date for sometime but he felt that with the presence of the police there, they would be protected.

Currently, two other persons of the five who were hospitalised remain in hospital, one in serious condition.