No bail for Trelawny butcher on attempted murder charge 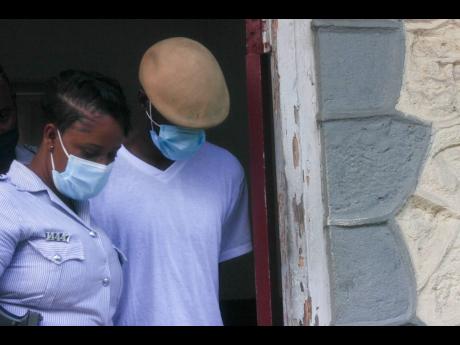 Ashley Anguin/Photographer
Anthony Bailey, ex-partner who allegedly stabbed 23-year-old Stephina Ralston in Warsop, Trelawny, leaves the Trelawny Parish Court alongside a policewoman on Monday. Bailey has not yet retained a lawyer.

Anthony Ricardo Bailey, the 34-year-old Trelawny butcher who allegedly launched a near-fatal knife attack on his former girlfriend Stephina Ralston, was remanded when he appeared in the Trelawny Parish Court on Monday.

Bailey, who is charged with attempted murder, showed no emotion as he entered the courthouse in Ulster Spring where Parish Judge Paula Archer Hall refused a bail application on his behalf, pending the outcome of another mention date set for later this week at the Clark’s Town courthouse.

While Bailey is yet to retain a lawyer, the prosecution made it clear to the court that it was not in favour of the granting of bail to the accused.

The court was told that based on the accused man’s temperament, it is quite likely that, if granted bail, he will tamper with the case by seeking to intimidate the witnesses.

“The accused man is from the same community of Warsop, Trelawny, and if admitted to bail, it is likely that he will interfere with the witnesses in the case against him,” a member of the prosecution team told the court. “He knows the community well and will use that knowledge to pursue the complainant and the other witnesses by any means necessary.”

The court was also informed that the police mounted three islandwide operations in search of Bailey before he surrendered on April 26.

On the day Bailey surrendered, he reportedly told the police that he was aware that they were searching for him.

“Mi know seh the police a look fi mi but mi just a come now fi come talk to you,” Bailey reportedly said when he was cautioned by the police when he was arrested.

Bailey told Judge Archer Hall that he would have to ask his mother if she would retain a lawyer on his behalf.

The allegations are that on April 15, Bailey attacked Ralston, 23, with a sharp knife and inflicted multiple stabs and slash wounds all over her body before fleeing the scene, believing she was dead.

The Trelawny butcher, who is popularly known as ‘Israel’, had been accused by Ralston of attacking her with a machete in the past.

In a Gleaner story published on April 22, Ralston described her near-death experience as the culmination of many months of brutal beatings at the hands of Bailey during their 16-month relationship.