Judge to Beenie Man: Not even the king is above the law 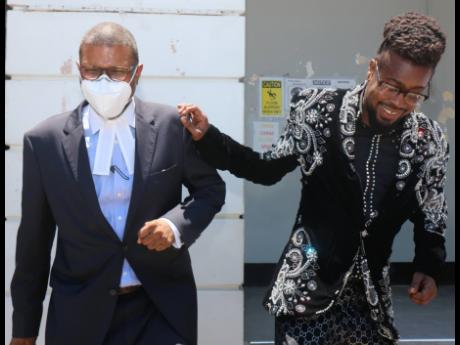 Dancehall artiste Moses ‘Beenie Man’ Davis was fined $150,000 or 35 days in jail when he appeared for sentencing before the St Elizabeth Parish Court in Black River yesterday, having previously pleaded guilty to breaches of the Disaster Risk Management Act (DRMA).

Davis’ attorney, Roderick Gordon, pleaded with the presiding magistrate, Justice Horace Mitchell, to show leniency to the entertainer based on the circumstances surrounding the charges.

According to Gordon, no performances were taking place at the time when the police visited the location in Shrewsbury district in St Elizabeth, where the breach was committed last November.

“Mr Davis was supporting an event to raise funds with which to purchase tablets for needy children in the community, and when the police came, my client, like any other decent law-abiding citizens, introduced himself to the officers and pointed out that he was not having a session,” Gordon told the court.

The attorney also pointed out that since Davis was a celebrity, as is customary, his image was used as the face of the event, albeit it was not actually a dancehall event.

In handing down the sentencing, the judge told Davis that as the ‘King of the Dancehall’, his ‘kingship’ comes with responsibility.

“I hope when you leave this courtroom today, you will let Jamaicans know that not even the king is above the law,” the judge told Davis. “Mr Davis, you can either be the ‘King of Dancehall’ in this case, or you can just be the other guy, and I hope you are not the other guy.”

Davis informed the judge that in this case, he was indeed the king not the other guy, and thanked the court for not being too harsh on him.

On January 1 this year, the entertainer was summoned to the Black River Police Station, where he was charged for hosting an illegal event in Shrewsbury district on November 19, 2020.

Davis was charged with breaches of the DRMA and the Noise Abatement Act by the police after he was seen at the event and subsequently identified himself to the police.

The entertainer pleaded not guilty to both charges on his first appearance when his attorney told the court that Davis was not hosting the event.

In a later appearance before the court, he entered a guilty plea, admitting that he had breached the DRMA.