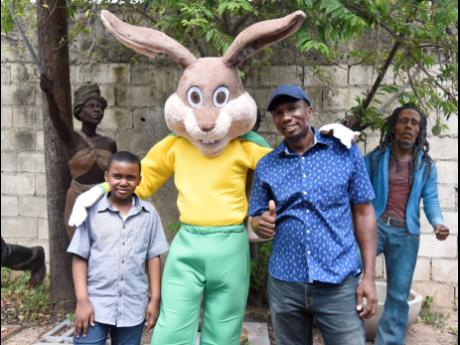 Nicholas Nunes/Photographer
Scheed Cole (right), sculptor of Mr Protector, and Richard Small, student of Bamboo Primary and Junior High School in St Ann who won the Child Protection Mascot competition in 2019, flank the mascot that will be used in the promotion of child safety and development. 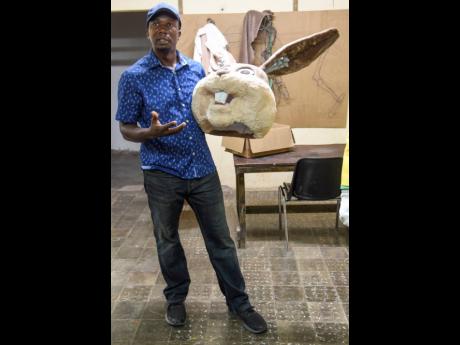 Nicholas Nunes/Photographer
Scheed Cole, the sculptor chosen to bring the child protection mascot to life, discusses how he sourced material for his creation.
1
2

The Child Protection and Family Services Agency (CPFSA) unlocked the doors for open competitive bidding for the creation of their mascot locally, but only one name came up.

Scheed Cole, chief executive officer of Sculptural Elements and Construction 01 Ltd (SECTION 01), is known in corporate circles for his manufacture of mascots by way of limited tender.

Since 2001, he has never had to bid for a job given the infancy of the mascot-making industry in Jamaica, with few rivals, too, in the Caribbean.

“A lot of people do art as a hobby and they don’t know how to make an income from it,” said Cole, who, along with his wife, Keisha Cole, resigned from teaching in the classroom in 2000.

The Mico University College graduate said that having opened his company in 2001, he has made more than 30 mascots in Jamaica, with the majority of them acting as marketing tools and entrance pieces for organisations.

The famous mascots of the Jamaica Anti-Doping Commission – ‘Leo, The Dope Patrol Officer’, Tastee ‘Mr Wedge’, as well as four for Northern Caribbean University – are among the creations of SECTION 01. The company is also known for sculpture such as the elephant at Liberty Mall in Spanish Town.

Cole bemoaned the lack of interest in applied arts, underscoring that more people appear to be interested in the fine arts, thus forsaking the needs of the customers.

“That’s why I can’t hire them because they have to now apply the art to measurement, to design, to material, to environments, etc, and they complain that I want to put them in a box,” he said in frustration.

Cole said that quite a few students have walked through his doors with an interest in learning more, especially about sculpting with high-density foam he used to create Mr Protector’s headpiece. However, none has committed long term to mastering the art.

While mascots can take up to two to three months to manufacture, Mr Protector took Cole only three weeks to get ready for review.

He praised eight-year-old Richard Small, whose drawing of the rabbit gained him acclaim.

“For him to be able to draw two profiles, front and side, that is proportional, that is a gift,” Cole said of Small, student of Bamboo Primary and Junior High School in St Ann who won the Child Protection Mascot competition in 2019.

“He is a realist and he doesn’t study anatomy. The fact that he did it proportional shows that he has potential in learning anatomy as well.”

Small beamed as he looked at the animated figure that will be able to accommodate persons as tall as six feet.

The CPFSA logo and other features will be added.

However, Rochelle Dixon Gordon, communications manager at the CPFSA, said the organisation might consider duplicating Mr Protector because of the considerable wear and tear from islandwide tours.

“The mascot will be heavily used. If schools reopen – and we can really roll out come September – then we could look at maybe the end of the year into next year to have both of them working together,” Dixon Gordon said.