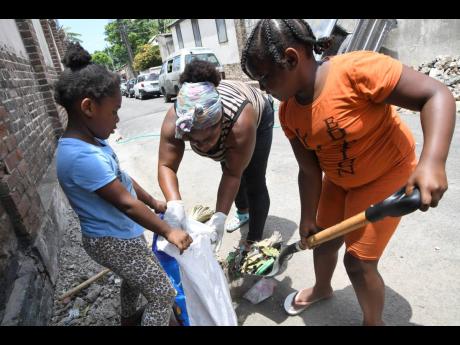 Rudolph Brown/Photographer
Stacy-Ann Donaldson (centre) and her children Azuri Longmore (left) and Jesian Pellington cleaning outside their gateway to beautify the North Street entrance to Rum Lane in Kingston on Monday. Donaldson said that the community suffers from an epidemic of poor disposal practices.

A coronavirus-linked order might have prohibited movement on Labour Day, but Stacy-Ann Donaldson and her army of child recruits just couldn’t stand by and watch for one more day as rogue residents and passers-by transform the entrance to her community into a dump site.

At the intersection of North Street and Rum Lane - one of the many tough neighbourhoods in the capital Kingston - children assisted in giving a facelift to the community under the watchful eye of guardians and concerned residents.

But Monday’s beautification drive was no Labour Day project but serendipitously coincided with the traditional clean-up activities of the annual commemoration.

The initiative is part of a larger culture change aimed at reorienting residents on garbage disposal.

Stacy-Ann Donaldson, president of the Rose Gardens Community Development Committee, and her happy helpers, including her own daughters Azuri Longmore and Jesian Pellington, are determined to fill the vacuum of open spaces by planting fruit trees to deter litterbugs.

Much of Kingston is a jungle of densely packed concrete and board structures hemmed in by zinc fences. What green space exists is often hijacked for the tossing and burning of garbage that presents an eyesore, worsening the crisis of urban blight.

But Donaldson has resolved to make a difference.

“It is something that I have done before, but we didn’t put anything there, so when you clean it and leave it, they dump it again,” she said of the cycle of littering that has helped earn Kingston’s notoriety as a dirty city.

“I am trying to eliminate the dumping. So when we put something there, there is no space for them to dump anything again,” Donaldson added.

Donaldson partnered with the GraceKennedy Group, the conglomerate headquartered in the more pristine business district downtown, which provided 10 garbage receptacles to the cause. GraceKennedy has also pledged pallets for the erection of seats.

“What I want to do is clean up the area, plant some things there, and put some seats for children to come, play, and sit,” Donaldson told The Gleaner.

She said that her campaign was met with resistance as some persons reportedly objected to her cleaning up the area. Despite that, she got up on Monday morning like a woman possessed and started cleaning up what she called her “gateway”.

Donaldson said she was putting muscle behind the project not in her capacity as CDC president, but “just as a citizen living on Rum Lane” who was tired and ashamed of disembarking a taxi to step into mounds of garbage.

The garbage receptacles provided by GraceKennedy have already been redistributed to residents along Rum Lane and Charles Street.

Among the fruit trees she intends to plant in the traditional dump site are apple, guava, and soursop. Pine suckers are also in the mix.

With the area now clear, Donaldson knows that the real battle lies ahead.

The culture change she so vigorously lobbies for will involve residents no longer lighting fires at their convenience and committing to a new code of cleanliness.

“Worse than Riverton; it was like human faeces. All kinds of garbage you can think about were dumped here - old vehicles, old equipment,” Donaldson said.

“When they chop down the trees, they put them on the sidewalk, and persons start dumping beyond the trees, and the pile goes back down in the lane.”

An onlooker who observed the facelift said it would take a collaborative effort from all stakeholders to keep the community clean.

“How we keep ya suh a how we keep we house. The front of the lane is all of us gateway,” said the resident, who declined to disclose his identity.

Donaldson gives credit to residents like Wayne Russell and Ebony Tracy, who were instrumental in making the weekend clean-up initiative a reality.