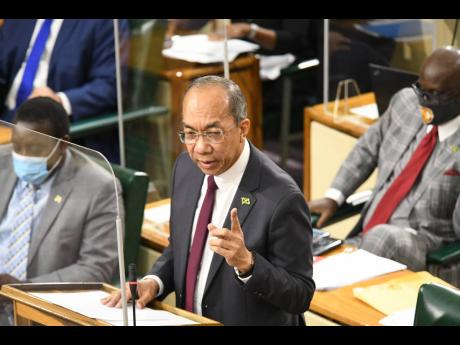 Attempts to derail criminal investigations by falsifying, concealing, destroying or disposing of documents or items relevant to a probe could land offenders in serious trouble with the law.

The proposed penalty, if new provisions in the Criminal Justice (Suppression of Criminal Organisations) (Amendment) Act, 2021 are approved by lawmakers, would be a fine not exceeding $5 million or a maximum sentence of five or 10 years if tried in parish or circuit courts, respectively.

Opening debate on a bill to amend the parent legislation, more commonly known as the anti-gang law, National Security Minister Dr Horace Chang said that the offence would target activities that were intended to thwart criminal investigations.

Clause 14 of the bill, which seeks to amend the Criminal Justice (Administration) Act to include a new Section 39a, introduces the offence of “tipping off”.

The proposed law states that a person commits the offence of tipping off if “knowing or having reasonable grounds to believe that an investigation is being, or is about to be, conducted in respect of an offence, he discloses information about the probe to another person”.

Discussing the latest statistics from the Jamaica Constabulary Force, Chang said that there were 379 gangs operating in Jamaica. Of this number, 262 of the gangs are said to be active. This reflects an increase of five per cent over 2019.

He said that last year, 802 murders, or 61 per cent of annual killings, were assessed to be gang-related.

Chang said that the police have identified contract killing, extortion, robberies, drug and firearm trafficking to be the sources of income for the most influential second-generation gangs.

He blamed the high crime rate on gangs that continue to create mayhem.

Leader of the Opposition, Mark Golding, highlighted some concerns he had with the proposed legislation.

In Clause 11 of the bill, fishing without a licence or permit constitutes an offence.

Golding argued that the fisheries legislation addresses the matter of fishing without a permit. However, he said that an amendment in the anti-gang bill now before Parliament would take the offence of fishing without a licence to a whole new level if it was being done by three or more persons with a boat.

“To superimpose on that a whole new elevated set of potential penalties on them under anti-gang legislation seems, to me, an overkill,” he said.

Simple larceny has also become an applicable offence for the purposes of the anti-gang law where three or more persons are involved in the illegal activity.

“Simple larceny is petty theft, ‘tiefing’ smaller items, not typically something which would ever result in long periods of incarceration if you were successfully prosecuted,” Golding explained.

He said if the anti-gang law was used to prosecute three or more persons involved in larceny, they could face penalties of up to 25 years.

“I am really concerned about throwing into the anti-gang net some of these relatively minor offences,” the opposition leader said.

Golding said that under the parent legislation, criminal organisations were groups of three or more persons that come together for the purpose of committing serious offences. Serious offences were specifically defined and a list of offences was accordingly designated.

However, he said the concept has changed in the amending bill, with the designation of serious offences now replaced by applicable offences.

Expressing discomfort with this change, Golding said it could mean that persons who come together in groups to commit relatively minor offences could be prosecuted under the anti-gang law.

He argued that the anti-gang law carries potentially heavy penalties, and that groups of youngsters who might commit gambling offences and pickpockets could find themselves facing draconian punishments of up to 25 years in prison.

Debate on the bill is expected to resume at the next sitting of the House of Representatives.