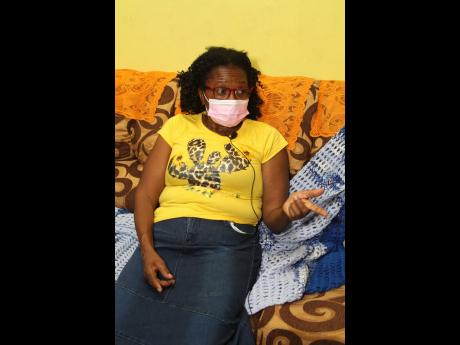 Nathaniel Stewart/Photographer
Joy Baker of Frankfield, Clarendon, is at her wits’ end because her son refuses to accept that he has a mental-health problem. 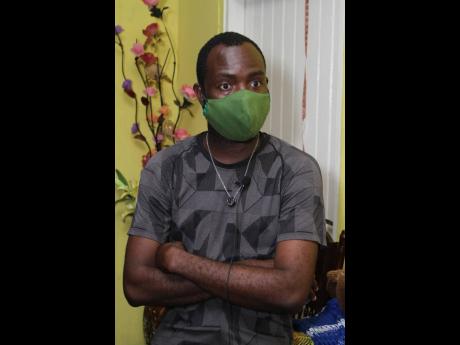 Nathaniel Stewart/Photographer
Rayon Morgan had to pull out of university and redirect funds for the care of his brother.
1
2

A 54-year-old Clarendon woman who bears the scars of maternal love may be at death’s door if she doesn’t get her schizophrenic son readmitted to rehab. The cry comes as the mother says she was beaten within an inch of her life on Monday by her 26-...

A 54-year-old Clarendon woman who bears the scars of maternal love may be at death’s door if she doesn’t get her schizophrenic son readmitted to rehab.

The cry comes as the mother says she was beaten within an inch of her life on Monday by her 26-year-old son.

Joy Baker, of Frankfield, Clarendon, told The Gleaner that her mentally ill son became infuriated after a visit by healthcare workers who had come to administer medication.

“Him give me some t’ump nearly kill me. A people haffi come down and lif’ me up and help me,” she said.

Monday’s merciless beating was not the first Joy has suffered at the hands of her son, whose name The Gleaner has opted not to publish.

Violence has been a recurring decimal in the Baker family home as they struggle to come to grips with the hurricane-force strength that mental illness unleashes.

Their house has not been spared. Windows. Furniture. Everything has been trashed by his fists of fury.

The police have even had to use tear gas, the family said, to quell his rage.

Recalling an earlier incident, Baker said her face received the brunt of the battering.

“Him start to beat me. Mi face mash up, mi two jaw mash up, and mi eyes bloodshot,” she recounted.

Baker said her son has also carried out a string of attacks on other family members, including against his then 76-year-old father in 2019. She said the elderly man lost teeth in a bust-up.

“We was trying to see if the Government could put him somewhere because we get ‘fraid of him,” said a distressed-looking Baker.

“He was in jail for, like, two months until them say them nuh have nowhere to keep him except in a prison, and we say prison nah go help ‘cause we know a sick him sick.”

But the early signs of mental illness may have eluded her, Baker admits, citing her son’s troubled childhood. It may also have worsened with his obsession with smoking while playing truant, the family theorises.

“I remember him fight off teacher at school when he was in grade four or grade five, and he used to fight me at home, but I didn’t take it serious. I didn’t pay it much mind ‘cause he use to be arrogant,” she told The Gleaner.

He was officially diagnosed with schizophrenia at a psychiatric clinic in Spanish Town, St Catherine, when he was 20.

Baker disclosed that her son’s health appeared to be on the right track for four months when he was admitted to a mental-health facility in 2018.

The joy was short-lived as she had to withdraw him, citing financial difficulties. She shared that the family was struggling to pay the monthly $50,000 fee and to provide miscellaneous items.

“We get him in the rehab, but we couldn’t afford it no more, so we a fi go back fi him,” Baker said.

Rayon Morgan told The Gleaner that the family had been traumatised by his brother being thrown in jail following the attack on his father.

Even fellow detainees of his brother’s, said Morgan, appealed that the mentally ill man get help.

“Seeing a mentally sick person placed in jail rather than somewhere he can get help is honestly heart-breaking,” he said.

Morgan said he withdrew from a master’s programme at The University of the West Indies to redirect those tuition funding towards his brother.

According to Morgan, the judge warned that if his brother “returned to his courthouse, he will lost him in the system” – a real threat given the island’s record of treatment of the mentally ill by the correctional services.

Jamaica’s prisons have been dungeons of shame for the mentally ill – a revelation made profound by the ignominious 2020 death of 81-year-old Noel Chambers, who had been held for 40 years without trial.

Morgan argues that enough is not being done to cater for the needs of the mentally ill.

He said that the last time his brother was taken to Bellevue Hospital, Jamaica’s major mental-health facility, he was treated and sent home because of space constraints.

In a years-long policy shift, the Ministry of Health has sought to decentralise its mental-health services to community-type interventions, but that roll-out has not been seamless.

Noted psychiatrist Dr E. Anthony Allen said that while community mental-health teams ought to be deployed across the country, he has received feedback from families that such help is not always available.

“Usually what happens is that there is coordination between the police and the community mental-health team, and we need to note that there are existing training programmes for the police about assisting,” said Allen.

A source at the Frankfield Police Station told The Gleaner that law enforcers often collaborate with healthcare workers.

“Even now we have police personnel who are assisting the mental-health workers in case the patient is behaving boisterous,” the cop said, though not providing details on the instant case.

“The police will do what they can to calm down the patient.”