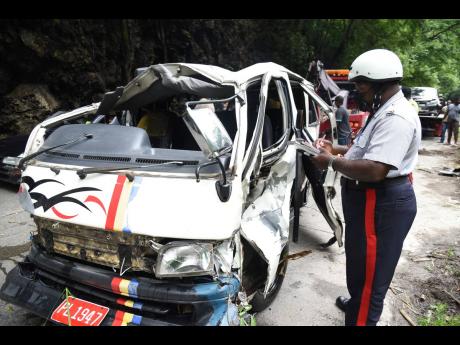 Ian Allen/Photographer
Police corporal Everton Allen jots down notes while observing the mangled Toyota Hiace minibus that had plunged into the Rio Cobre after colliding with a Toyota Fielder station wagon on Tuesday. Valerie Ennis, 59, died from crash-related injuries.

One woman died and nine others were hospitalised as a result of a two-vehicle collision along the Bog Walk Gorge about 9:30 a.m. on Tuesday.

Reports are that 59-year-old Valerie Ennis, of Linstead, was travelling westerly in a white Toyota Hiace minibus driven by 40-year-old Ralston White when it collided with a black Toyota Fielder going in the opposite direction.

The driver of the car reportedly overtook a line of vehicles and crashed into the minibus, which plunged into the Rio Cobre.

Ennis, who was ejected from the vehicle and was taken from the river by divers, was pronounced dead at hospital.

Nine others from the minibus, as well as the driver and a passenger in the Fielder motor car, were taken to hospital where they were treated.

The minibus driver, who lives in Portmore, plies the Spanish Town to Linstead route.

A passenger who was in the minibus and asked not to be identified told The Gleaner that Ennis was the last person picked up in Angels.

“She didn’t even get a good seat. ... It was about 10 of us on the bus, mi see the car coming straight for the bus and the driver try, but him neva have enough space to pass the car,” the passenger said.

The Bog Walk Gorge, which wends along the Rio Cobre, has been the scene of numerous major crashes over the years.

Last Friday, 49-year-old Ava Thelwell, of Shortwood, Kingston, was killed when she drove her Suzuki Grand Vitara SUV off Flat Bridge into the river. The death has been theorised to be a suicide.

A resident in her late 50s who identified herself as Lady G said she has been living in the vicinity of the gorge all her life.

She has seen many lives lost in the Rio Cobre.

“Sad to say, but we are expecting more. It started with the lady at Flat Bridge on Friday and we know from our experience that more would happen,” Lady G told The Gleaner.

“This river is haunted. It has its time when it take a lot of lives and then cools down. Nothing can be done about it.”

The last major accident in the gorge occurred in 2016, when six persons died after the Suzuki Grand Vitara they were travelling in careened into the river in the vicinity of Flat Bridge.