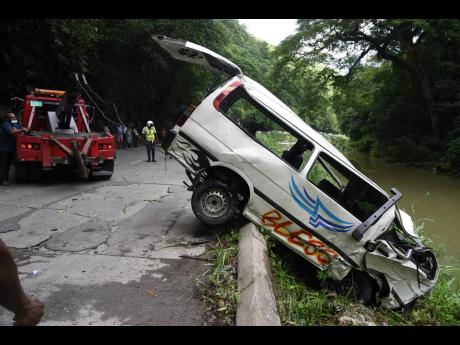 Ian Allen/Photographer
A wrecker reels in a Toyota Hiace minibus which plunged into the Rio Cobre after it was involved in a crash with a Toyota Fielder station wagon in the Bog Walk Gorge on Tuesday. One woman was killed.

St Catherine resident Anthony Morgan is just about fed up with his much-loved hustle as a diver in the Bog Walk Gorge.

Divers in the gorge have long pressed the Government to establish a fund to pay them when they plunge into the murky waters of the Rio Cobre to save drowning or crash victims.

But those appeals have not caused the authorities to budge.

“Government needs to look out for us as we have been risking our lives here fi years and no compensation,” Morgan told The Gleaner.

The 47-year-old Dam Head resident said that he has rescued many persons over the years.

The fresh call for assistance comes days after the deaths of two women in the gorge - 49-year-old Ava Thelwell in a suicide last Friday and Valerie Ennis, 59, who was a passenger in a minibus that plunged into the river after a collision on Tuesday.

Morgan recalled the 1996 tragedy when a minibus with 16 passengers careered off the road into the Rio Cobre, leaving several persons dead.

His view was echoed by others like Margaret Dempsy and Miriam Graham, who said that the unofficial divers were crucial to rescue efforts in the gorge.

“Look what happened here this morning? These are the first set of divers that started to search the river, so them must get pay,” Graham said of the divers’ response to the scene of Tuesday’s crash of a Toyota Fielder station wagon and Toyota Hiace minibus that caused almost a dozen people to be taken to hospital.

Councillor Patricia Harris of the Angels division is also lobbying the Government to offer compensation to divers like Morgan.

“I totally understand their plight, and I have even made representation for payments to be given to them. I realised that they are saving lives,” Harris said.

Harris revealed that a shed with rescue equipment like rope has been provided but urged that more be done.

Certified swimmers from the Jamaica Defence Force are sometimes enlisted in rescue bids in the Bog Walk Gorge, but the locals insist that they are often the first responders on emergency scenes.

“Just remember, a we first reach here most time when there is a problem, so pay we or else we will be more discouraged, and people will die,” Morgan said.

Jerome McLaughlin, another diver, is also wary of the dangers to life and limb that they face.

“It is sad, as you can dive and get injuries and nothing to take care of yourself,” the 32-year-old said.