Dead in the water 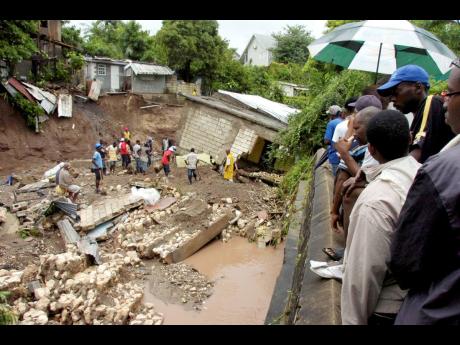 File
Anxious residents of Sandy Park in St Andrew look on as a team digs through silt and debris in search of six family members who were washed away when their house collapsed into the waterway in September 2010. 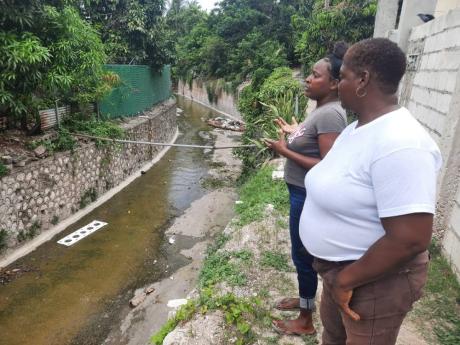 Photo by Corey Robinson
left: Aretha Young (foreground), sister of Skeeta Ann-Marie Young, reflects on the 2010 tragedy with her best friend at the site where the house collapsed in 2010. Skeeta and her partner, George Bailey, and their four children died in the Sandy Park tragedy. 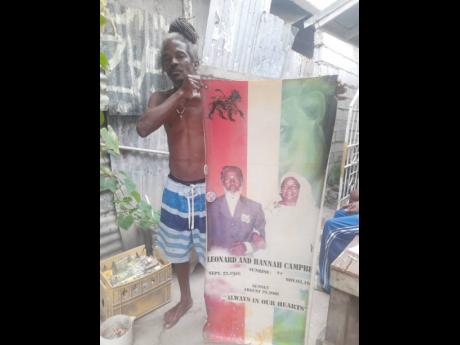 Photo by Corey Robinson
Photos by Corey Robinson The decomposed body of George Campbell’s mother Hannah was found under a bridge, miles from Kintyre where she was washed away by the Hope River, while his father, Leonard, was never located. 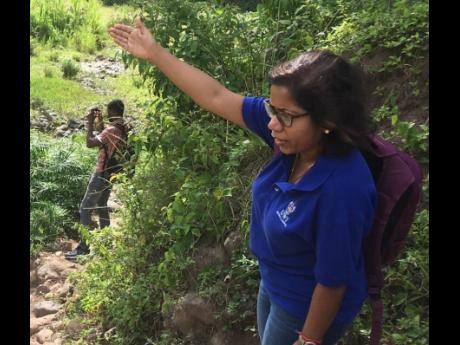 File
File Hydrologist Dr Arpita Mandal of The University of the West Indies.
1
2
3
4

George Campbell can still hear his mother’s screams for help as she and his father disappeared beneath the raging Hope River in St Andrew during the passing of Hurricane Gustav in 2008. The death wails, he said, are chilling, and similar to those...

George Campbell can still hear his mother’s screams for help as she and his father disappeared beneath the raging Hope River in St Andrew during the passing of Hurricane Gustav in 2008.

The death wails, he said, are chilling, and similar to those described by residents that echoed through the Sandy Park community two years later when a family of six and their home were scooped off the banks of the Sandy Gully in the Corporate Area in heavy rainfall. Mother, father, four children: dead.

Now, a decade later and with no true test to Government’s infrastructure upgrades since hurricanes Gustav and Sandy, and with many of the deadly factors – houses built in river floodplains, deforestation and shoddy drainage work by contractors – still present, scientists and engineers fear the worst for this above-average hurricane season.

And so, too, should Jamaicans, they warned – especially thousands living in the path of the Hope and Yallahs (St Thomas) rivers, the Rio Cobre (St Catherine), Rio Minho (Clarendon), and around the North and South gullies in Montego Bay, St James, just some of the areas prone to flooding and landslides.

“The damage happens because people are living where they are not supposed to be living,” charged Dr Arpita Mandal, hydrologist and postgraduate coordinator in the Department of Geography and Geology at The University of the West Indies.

For years, Mandal has researched the Hope River and the Kintyre community, where Campbell’s parents lived for decades before their home atop the riverbank collapsed with them inside. They are among at least a dozen homeowners said swept away by the river.

Most are squatters, but Campbell is adamant his parents were the owners of their land – a similar claim from some residents of Weise Road in Bull Bay, St Andrew, after the Chalky River flooded their homes during rains associated with the outer bands of tropical storms Eta and Zeta last November.

“The rainfall we have in Jamaica during these hurricane months is intense. You can have 200-214 millimetres in one day and the river channels are not able to accommodate that amount of water,” said Mandal, noting the steepness of the Hope River and the tonnes of loose silt and debris it carries.

“If you look at that Kintyre area, a lot of houses are literally on the riverbed. When the river comes down with high force and a lot of material, it needs space to move, and when it doesn’t get space, it floods out,” she explained. “Some of the rivers are regularly monitored – like the Rio Cobre, which has a floodgate near the Bog Walk gorge, [but] people still continue to live on the steep riverbanks.

“The Government has been doing a lot of things under climate change projects to construct dams and so on, but these houses should not be there,” she argued, noting that relocation would be a political nightmare.

Pearnel Charles Jr, minister of housing, urban renewal, environment and climate change, is hoping to placate such horrors through a national squatter survey aimed at identifying location, growth, and history of unplanned settlements islandwide. He said the study should be completed by year end, and will inform tailored solutions for instances, among others, where persons, like Campbell’s parents, have acquired legitimate land titles in such hazardous areas.

“The assessments are going to lead us to define different solutions for different spaces. So take a space where you have a mixed-circumstance, where you have some persons formal and some informal, you might very well at that point help informal persons to become formalised. There are two options: either relocate from the space if it proves to be too vulnerable or build out the infrastructure to withstand the things that make them vulnerable,” he posited.

Last year’s hurricane season saw 30 named storms, 13 hurricanes and six major hurricanes. This year, as many as 20 tropical storms are predicted, of which 10 could become hurricanes and five major.

Marking the start of the hurricane season, Desmond McKenzie, minister of local government, who has repeatedly fingered the nexus between politics and squatting, warned: “We continue to build in areas that are not designated for construction … and when rain comes and there is flooding, everything is lost and the consequences are great in other areas,” as he called on Jamaicans to change their building practices.

“There are a lot of buildings in these river plains and people are not taking into consideration that we are going to have a lot of material that erodes and comes downstream. For their personal gains, they have constructed these buildings and have changed the [river] channel, and therefore, it won’t have the capacity to carry not just water but debris,” he explained.

And residents are not only to blame, he said.

“In some cases, when they (contractors) are building things like culverts and bridges, they don’t take into consideration that some tree trunks, debris and other things coming off of the hill are going to block the culverts and then everything builds up behind them,” he argued, citing drains along Marcus Garvey Drive in Kingston with similar flaws.

“When these waterways block up, that is when you have flooding.”

The scene of the collapse has long cleared, the gully upgraded, and residents moved back metres from the edge. Yet the memories linger, said Skeeta’s older sister, Aretha Young.

Both bodies of George and Skeeta were found in the Seaview Gardens community miles away. Kevonie’s corpse was found in the vicinity of Petrojam. Sidoney was found at Newport West and Keniji was found beneath rubble in the gully the same day.

The decomposed body of George Campbell’s mother Hannah was found under a bridge, miles from Kintyre, while his father, Leonard, like the promising Brandy of Sandy Park, has never been located.